Whenever there is a successful run on this server, the Runner must either take 1 brain damage or jack out. If the Runner jacks out, gain 5credit, draw 1 card, and trash Black Level Clearance.

Even knowing this floor existed was cause for termination...
Haas-Bioroid • Antonio De Luca • Terminal Directive 39
All sets:
Links: Decklists | ANCUR 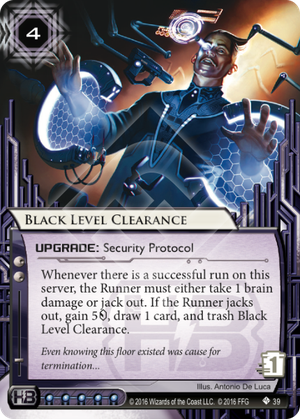 Jon Massinori activates on a successfull or unsuccessful run, and so does Account Siphon. The same thing would be valid for other alterantive to access cards, like Vamp.

(Free Mars era)
wookiez 111
I'd say when the run is declared successful first all runner on-success triggers resolve (Account Siphon run ability) and then all corp on-success triggers resolve (Black Level). It's the weirdest Siphon tech ever. The runner has two bad choices: Take 1 brain damage after his successful Siphon, but leaving Black Level where it is since Siphon replaces access OR use the jack-out-window offered by Black Level to trash it and give the corp creds directly after you siphoned them, negating the 'Siphon Lock'. — Krams 9 Aug 2017
Account Siphon replaces accesses, which you don't get if you choose to jack out. — Protikon 11 Aug 2017
I think Protikon is right. The run becomes successful on step 5.4 of the timing chart, but Account Siphon doesn't do anything until the Access step 5.5, so Black Level Clearance always fires first. — Toper 11 Aug 2017
What Toper said is correct. I was mistaken about the point at which Siphon resolved. — Krams 16 Aug 2017