click, forfeit an agenda: Play an event from your heap, ignoring all costs.

A despicable web of outcasts and infamy, no government or corporation could effectively shut it down. If only because so many of their sysops, executives, and covert agents made use of it.
Neutral • Donald Crank • Terminal Directive 27
All sets:
Links: Decklists | ANCUR 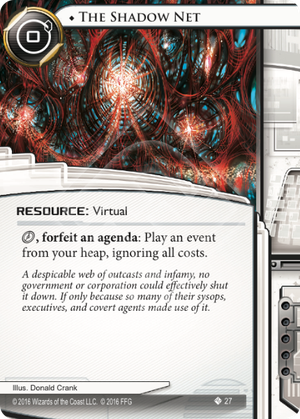 So stuff this is good with:

If there are any other notable cards I'll add them to the list. Unfortunately, I'm not sure that Fisk Investment Seminar works, otherwise that might be a legitimate mill strategy.

(Terminal Directive era)
whirrun 126
The price of freedom cannot be used the way you describe it as it gets removed from the game instead of being trashed after it resolves. Bribery just has X = 0, so it gives nothing. — H0tl1ne 28 Apr 2017
Good point on Freedom, I'll edit the review. If X=0 for the other two, then that definitely makes me sad. — whirrun 1 May 2017
The first event that comes to mind with this card is Apocalypse. You still have to get in to all the centrals, but recurring Apoc (with something like Fan Site) could be very powerful — powerguy 2 May 2017
Yeah, I played against someone who used this with Apoc. It was a sweet deck. I made my own and (I think) improved on it. Also, Day Job is great with The Shadow Net. Turn your Fan Sites into 8 credits in one click. — quailman2101 3 May 2017
Actually you get 10 credits with it. — quailman2101 6 May 2017
Does the play restriction ("play only if you made a successful run ...") count as a cost? It's not phrased in the form of "as an additional cost" or something like that but as a limitation on play rather than a price to pay. — Silv 16 May 2017
"Play only if you made a succesful run ..." is not a cost. Card costs include the credit number in the top left of the card, plus any text that reads "as an additional cost". — Kikai 30 Oct 2017