Choose a card in or protecting a remote server. That card cannot be rezzed this turn.

Each AI had been tasked with finding a solution to the same problem but with different variables.
Shaper • Mark Molnar • Terminal Directive 13
All sets:
Links: Decklists | ANCUR 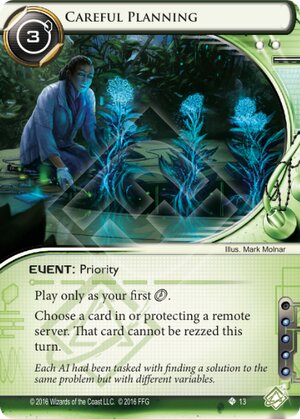 The name Careful Planning is apt. This is a risk management card that lets you avoid unpleasant surprises.

The obvious way to use it is to prevent the rez of a piece of ice on a server you intent to run on. If there is only one unknown piece of ice on a server, you know you will get through the rest of them and the corp has enough credits to rez nasty ice Careful Planning lets you execute your strategy without having to fear, say, a Fairchild 3.0.

Careful Planning has three downsides though. It's a priority, but that doesn't really matter all that much since you want to play it early in the turn before running anyway and you generally want to run early in the turn. It's only for remote servers. So it's good for going after installed agendas but not for your typical R&D dig. Finally the cost is 3. That's not exactly cheap for piece of mind.

The cost of Careful Planning makes it useful only if the expected preventable badness of a run is high enough. By expected preventable badness I mean a combination of the chance that something nasty happens that Careful Planning could prevent and the degree of badness. E.g. if you strongly suspect there's an unrezzed Mausolus with 3 counters and the corp can pay for it and you know you wouldn't be able to break it the expected badness is pretty high. What also matters is how much you invest in a run. If you need to pay 10 to get through to a scoring server and then hit a wall (Ice Wall for the literalists) that would hurt pretty badly in terms of tempo.

While bypassing is a criminal thing Careful Planning actually has much the same effect, provided the ice is unrezzed. If you assume that most servers are going to have maybe two pieces of ice, three tops, being able to go around one of them is pretty powerful.

In terms of play style Careful Planning works best with the few-runs-meaningful-accesses style. If you want to make few runs but make them matter being able to reduce risk is a great thing. Just remember that it only works on remotes, you don't want to look as foolish as I did when I wrote the initial version of this review assuming it's a tool for safer R&D multi-accesses.

(Terminal Directive era)
Silv 301
Note that Careful Planning doesn't combo with The Maker's Eye because Careful Planning only works on remote servers. — YourGo 29 Apr 2017
Ack, my reading skills are bad. I'll edit the review. Thanks. — Silv 30 Apr 2017
You could also use this to stop that card you know is Caprice from being rezzed. — quailman2101 30 Apr 2017
Using Escher directly after this will allow you to stick an unrezzed piece of ice on a central ready for abuse! — HandKing 14 Jun 2018