click, click: Make a run. The first time you approach a rezzed piece of ice during this run, you may pay credits equal to the strength of that ice. If you do, bypass that ice the next time you encounter it this run.

Know your mark, their weaknesses and strengths--both will show how to best bypass their defenses.
Criminal • Liiga Smilshkalne • Terminal Directive 10
All sets:
Links: Decklists | ANCUR 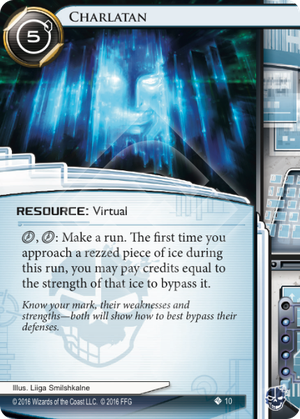 At first sight Charlatan seems to be powerful but it has many little downsides that all add up to make it less than impressive.

First of all, 5 is pretty high for a resource, that's Professional Contacts level. The investment is significant, especially with how credit hungry criminal breakers can be.

Once it's installed the activation cost is . That's reasonable. But because it triggers a run you cannot use Charlatan with run events such as Legwork and Account Siphon. But those tend to be exactly the runs that matter most.

The bypass ability only works on the first rezzed piece of ice. That means Charlatan has the same problem as Inside Job: the corp can just install a gearcheck as the new outermost piece of ice to keep the heavy ice from being bypassed.

Paying the strength of ice to bypass doesn't seem too bad. I've crunched some numbers and what you end up with is this:

For the 0-5 cost ice, the by far most common category, Charlatan takes roughly as much to bypass the ice as for the corp to rez it. At higher cost levels this changes but expensive ice is rare.

Aside from giving me an opportunity to practice my spreadsheet-fu this little diversion into numbers tells us something important: even if Charlatan works on the right piece of ice it still costs a lot to get around that ice.

Charlatan doesn't work on unrezzed ice so it's only something that's useful for rezzed ice that's also the outermost piece of rezzed ice and who's strength is significantly less than the cost your normal breakers need to break it.

Still, there feels there could be a role for Charlatan in the early game, when you don't have all your breakers out yet and the corp has only one piece of ice in front of HQ. The install cost of 5 makes that less than attractive though, that's a heavy investment in a stage of the game where you typically don't have huge amounts of money.

All in all I'm not impressed. But perhaps some criminal entrepreneurs see potential that I've missed.

(Terminal Directive era)
Silv 296
I think it's a really nice way to punish the corp for just running gear-check/low strength ice. Rushing an Astro behind an Quandary looks like a much worse proposition if you suspect your opponent plays this card. — Capstone 11 May 2017
Sure, but in exchange for not spending like 1 credit or so to break the ice you spend an extra click. Not sure that's worth it. Plus in the early game the investment of 5 credits is quite big and it has the same problems as normal breakers: you first need to draw it. — Silv 12 May 2017
Not sure wheter it makes a big difference, but I think the use of this is as an alternative to breakers. That means you simply won't use it on certain ice, only on ice with lots of subrutines and little strength, such as Komainu aganst which this is really efficient. — bvc 15 May 2017
That's probably how it's intended to be used, but you're dependent on the layout of the server for that to work well. — Silv 15 May 2017