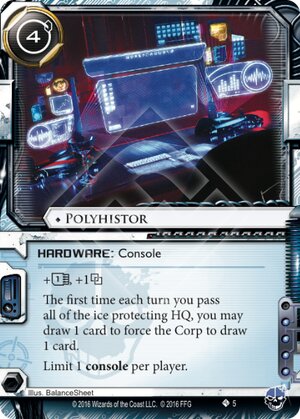 The first time each turn you pass all of the ice protecting HQ, you may draw 1 card to force the Corp to draw 1 card.

Illustrated by BalanceSheet
Decklists with this card

Here's the problem with that: you force the corp to draw at most 1 extra card each turn. In a significant number of cases that would help rather than hinder the corp. You could not use the ability but then you lose out on your draw as well. So the ability is weak at least part of the time. The absolute best case scenario is when you can get the corp 5 or 6 agenda's in hand, but that's kinda unlikely, though not impossible.

To make most of the ability you have to get the corp to draw more cards. Laramy Fisk: Savvy Investor, Fisk Investment Seminar and SYN Attack help here. And I do see some value in Polyhistor as Fisk's console (I guess it's thematically Cambridge's, but with regard to effect it's clearly Fisk's). If you play Fisk with Polyhistor and on click 1 do Fisk Investment Seminar, and on click 2 an HQ run (e.g. Account Siphon) you end up giving the corp 5 cards and drawing 4 cards yourself. Without Jackson Howard around and if archives is open the corp will likely end up agenda flooded after their next turn (since they don't need to discard until the end of their turn) and you can go for a heist with Legwork.

That said, is the 1 extra card you force the corp to draw worth not getting a credit per successful run with Desperado? It's a difficult call to make for a Fisk deck. For any other deck it's not so difficult: nope.

(Terminal Directive Cards era)
Silv 314
Not sure why they took it off the mwl. It is once again the console that will be in 95% of criminal decks. — quailman2101 16 May 2017
Let's face it though, unless they put it on the super-mwl (Faust tier) or errata it to give a credit only on the first run of the run Desperado will be the criminal console. The bigger and more relevant question though is if Desperado has a too great effect on the meta game. I don't think it has really, it's the best console for criminals but it doesn't make any particular strategy dominant. The only big effect is that is makes people run more aggressively and that's not a negative for the game on the whole. — Silv 16 May 2017
Does this ability fire before you access cards from HQ? — Zeebag 2 Jun 2017
@Zeebag, yes. "On a successful run" abilities trigger before accessing cards. This card, which triggers "when you pass all the ice" triggers even before those. — OrionJA 8 Aug 2017
Does Polyhistor trigger if there is no ice protecting HQ since there is no ice to pass? — Segletes 24 Dec 2017
I don’t think it does. Looking at the “Timing Stucture of a Run”, of there is no ice, you skip straight to accessing the server. No interaction happens (which means no ice was “passed”). That’s my interpretation anyways, and how we played this situation. — Techsture 13 Jan 2018
"All" includes "0" - if there's 0 ice, you're still passing all ice, so it would trigger, I believe. — HandKing 14 Mar 2018