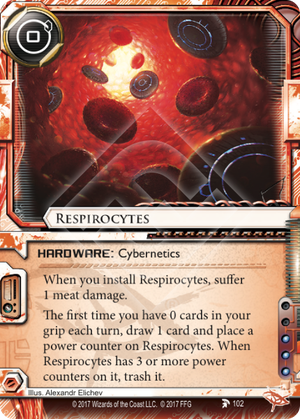 Respirocytes is another way of saying "red blood cells", but in a more scientific way. The suffix -cyte derives from Latin cyta and Ancient Greek kútos, meaning "container", "vessel", or "jar". In modern medical terms, the suffix is used to denote a mature cell. Respirocytes are therefore cells that assist in respiration.

However, in science fiction and, increasingly, science reality, respirocytes can also be used to refer to any cell in the blood that contributes to respiratory function. This definition includes artificial respirocytes, which are proposed nanomachines built to maximize oxygen and carbon dioxide transfer. Since this is the future and also Mars, I'm pretty sure this cybernetics card is meant to be the latter.

Plays well with cards that leverage damage into benefits. I've Had Worse is a good in-faction example; Synthetic Blood is another - sidenote, if you have synthetic blood, then why do you need artificial respirocytes? Unfortunately FFG seem to have gotten wise to these sorts of shenanigans, since First Responders specifically reads "damage from a Corp card".

Respirocytes is, of course, meant to synergize with the other cards in the Red Sands cycle, being ideal fodder for Clan Vengeance and easily mitigated by Jarogniew Mercs. It was, for a while, great for degenerate Salvaged Vanadis Armory decks, before the whole Armory got banned.

Since we're on the transhumanist kick, consider pairing with a set of Titanium Ribs or visiting the Chrome Parlor. Honestly, I never expected to see another cybernetics card after SanSan ended, and I'm really pleased to see that FFG are revisiting some of these old card archetypes.

(Crimson Dust era)
Agenarchi 74
I really want to like this card and build a deck around it. But it just isn't very good. This can at most let you draw 3 cards. Diesel does the same without all the hassle. You don't have to take meat damage, you don't have to empty your hand 3 times. To me, you need to use this because you want the meat damage. You can try using with Officer Frank and a couple other cards, but I don't think it's really that viable. — quailman2101 29 Nov 2017
0

Zero-cost self meat for your corp-blaming needs.

You may even stack them and try to get to empty hand for, like, Diesel! Or almost-Diesel. Not much, but still somewhat synergical with whole self-damage thing.

(Crimson Dust era)
WildSam 48
I'm not sure if they are stack-able. By the time the second one tries to resolve, your grip is no longer empty. At least that is how it is coded on j.net. — quailman2101 30 Aug 2017