The first time you derez a piece of ice each turn, gain 2credit.

"I don't bother asking why anymore—he never says—but if I had to guess, it's because he's embezzling and using my runs to disguise it. Not that I care. His credit spends as well as the next guy's" -Moth
Criminal • Jan-Wah Li • Blood and Water 65
All sets:
Links: Decklists | ANCUR 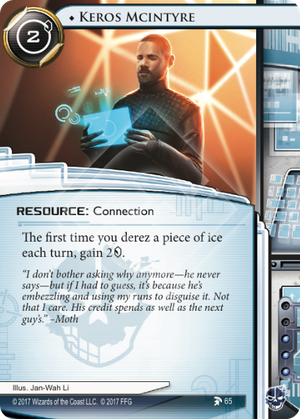 Insult to injury for derezzing decks.

He's unfortunately unique (criminals would love a few clones of him, but Jinteki wouldn't play ball). Other than that though there's very little not to like. The install cost of 2 is paid for the first time you derez ice with him installed, possibly even in the same turn as you install him.

Since there's very little to analyze about his ability on itself lets look at the options for derezzing ice. * means will rotate out soon once the first pack of the cycle after Red Sands hits.

Certainly no lack of options. The old ones (Crescentus and Emergency Shutdown) are powerful but obviously not the way forward. Exploit is cool if you can pull it off but doesn't work well with Keros since it's a high cost to derez 3 but you only get credits for derezzing one.

The rest works pretty well with Keros. One card in particular stands out however: Rubicon Switch. You can only use it once per turn but Keros only gives money once per turn and the effect of combining the two is a 2 discount on Rubicon Switch. With a decent enough economy that can make life really annoying for the corp.

A bird lady deck can also use Keros pretty well. At the very least you get back the money needed to make one bird return to the nest each turn.

From a deckbuilding perspective Keros is easy. If you derez ice often enough he's very good economy, if you don't he doesn't do anything and thus can be left out.