subroutine Add 1 installed program to the top of the stack. 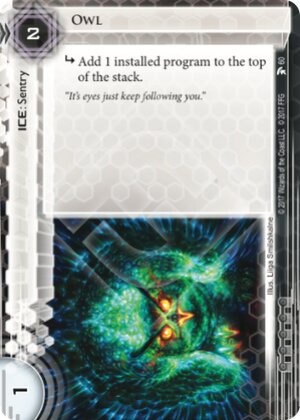 Owl - It is eyes just keep following you.

Suspicious apostraphes aside, let us consider the virtues of Owl for a moment. First and foremost - It's thematically excellent! Owls are known for their silent flight, and this thing glided so silently under the radar that I even forgot what cycle it was in.

Now, on to practical stuff. Adding to the stack instead of trashing seems to be an increasingly useful effect. As well as getting around things like good old Trash'o'Cube and borking fat witchy stacks, the added click and credit(s) hassle is not to be underestimated. In edge cases, it can also throw a (mini, meccano-sized) wrench into decks that have a lot of shuffle effects. Can't go tutoring stuff quite so easily when you have something valuable on the top, huh? Not to mention it's also very useful when, ah...

Honestly, I just like owls. Never mind the mechanics. Owls are cool. Owls are good. Give one a home. Put an Owl in your deck today!

One of only a few gear check Sentries, and specialized to require the Runner to find two breakers early game to get into a server. Owl's bread-and-butter use case is to install in front of a cheap Code Gate or Barrier, then threaten to get rid of the Runner's Decoder or Fracter if they can't break it. Then they bounce off Vanilla and are sad. Thus they need the Decoder/Fracter AND a Killer in order to get in, and with a total cost of 3 credits to set up and rez everything it's pretty easy to go Owl/Vanilla/Remote face down install and credibly threaten to use Subliminal Messaging to score a 3/2 immediately unless they can find the two breakers they need right away. Or an AI. Either way, this is likely to tax the Runner's economy if they want to close that scoring window before you can use it.

Most competition is situational (News Hound requires a current, Tour Guide requires face-up assets, Dracō requires money...), with the main exception being the 4 credit Rototurret which is much better at demanding a Killer but much worse at gearchecking two breaker types at once. It's also quite a bit more expensive.

The other main use case Owl has is just as a cheap time-waster. If it triggers on facecheck then reinstalling the program will cost the Runner two clicks and probably some money, which is pretty good, and at 2 credits to rez it can trip up Runners who thought they were safe doing exploratory runs without a Killer because you're too poor to rez anything nasty.

All in all I think Owl is pretty good as a gear check Sentry. It doesn't require extra infrastructure to work, only requires the Runner to have a program installed in order to be annoying, it's cheap, and in a deck already relying mostly on gearchecks it can combine with another cheap piece of ICE to create a surprisingly robust lockout in the first couple turns of the game. So if cheap ICE is your bag and you've had trouble rounding out your ICE suite with Sentries in the past, Owl is probably at least worth a look.

(Earth's Scion era)
LordRandomness 224
It's also in competion with Sapper in Weyland decks, which are some of the more likely candidates for wanting a rushy kind of ice. And for any deck that isn't running on an absolute shoestring Cobra is usually better too. — Greasythumb 29 May 2017
Honestly, this ICE IS for absolute shoestring budgets. It's for enabling a double gearcheck at rock bottom cost. On top of this, trash a program subroutines will fail to lock out against Paperclip/Black Orchestra so that's something to consider as well. (Plus Sapper has a trash cost, and no-one likes those) — LordRandomness 29 May 2017