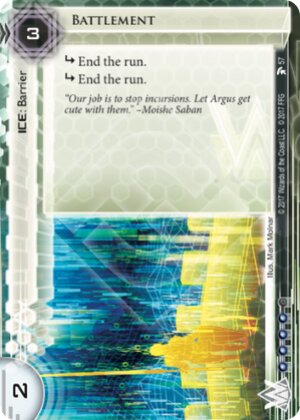 "Our job is to stop incursions. Let Argus get cute with them." -Moishe Saban
Illustrated by Mark Molnar
Decklists with this card

Isn't this just a Wall of Static?

Ways in which Battlement is just a Wall of Static:

Ways in which Battlement is not a Wall of Static

Battlement is stronger against atypical, tricksy rigs that use cards like Quetzal, ABR, Endless Hunger, Adjusted Matrix, etc. It is slightly better than Wall of Static against Saker and Chameleon metas. It is slightly worse against Parasite metas. I would consider Battlement if I'm also using Armored Servers. Otherwise it does not matter at all. Seeing how WoS is pretty much never slotted by players that have access to the whole card pool, I imagine the same fate will befall Battlement.

I like the idea of multi-sub barriers existing. This is just the most uninteresting way of doing it. The numbers on Battlement are 100% fair and appropriate. There's simply no reason to print a card if it is almost exactly identical to a neutral core set card.

Would like to see more interesting effects from barriers in the future. Bailiff, Quicksand, Bulwark, Kakugo, Seidr Adaptive Barrier, and Hailstorm are all good examples of barriers with effects in addition to ETR where you can weigh your options when deckbuilding.

Ultimately, I am disappointed by the design of Battlement. If it was in Terminal Directive as a way to give access to more Barriers in a limited cardpool, I could see it. But including it in a data pack is just a total waste. :-(

(Blood and Water era)
PureFlight 1029
I totally agree. Moreso, because Spiderweb exist and isn't going to rotate. — Krams 19 Jul 2017
The review skips over a few fringe benefits of Battlement, though. It is Quetzal-proof, Tracker-proof and stronger against such things as Endless Hunger or Adjusted Matrix. — Gargulec 19 Jul 2017
...and ABR proof. And I spotted a slight mistake: It costs Inti 4c to break (1 less than WoS). — Krams 19 Jul 2017
...Also Breach breaks Battlement for only 2. — Toper 19 Jul 2017
For the most part you are correct. I don't really get why this costs 4 influence. — quailman2101 21 Jul 2017
Also synergizes more with Armored Servers. I'll add these things to the review. — PureFlight 27 Jul 2017
You might get an additional Chief Slee counter off of this, bit that's about al it has to offer. It would be absolutely amazing though if its strength and rez cost were reduced by two. — HyenaMars 17 Oct 2017
1

Spiderweb's younger sibling. The Quandary to the Enigma.

(Earth's Scion era)
timurleng 159
I was quite surprised to see that it is four influence. — quailman2101 25 May 2017
Probably an intentional design decision to make cheap/high-efficiency barriers a strongly Weyland suite. Not that FFG's particularly consistent about adherence to such things, but. — obscurica 2 Jun 2017
Probably it was weakened during testing. It makes senses if the original version is 3 STR, in which case it is strictly better than Static Wall. — Northnilly 19 Aug 2017