Whenever the Runner breaks a subroutine during a run on this server, gain 2credit if he or she is tagged.

"Toying with them is where the job satisfaction comes in".
NBN • Nasrul Hakim • Earth's Scion 56
All sets:
Links: Decklists | ANCUR 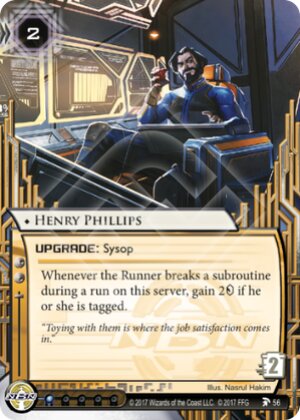 At 1 Influence, this seems like it could rapidly get out of hand in the right sort of setup. Imagine hitting Komainu or Brainstorm with this rezzed and active...you can take the damage or pay to give the corp money. Not a great pair of choices, that.

Unfortunately, the effort to set this up is considerable. You need Henry, AND the nasty multisub ICE, AND something like Bandwidth, Data Raven, or Thoth to slap a tag on them before they hit it. You can try and get the Runner tagged before they start the run, but if you can do that you should probably just be focusing on blowing them up instead.

For an even MORE janky fun time, place this upgrade in Chief Slee's server. Now you can get some work done with ETRs instead of them just bouncing off: Do you give Slee 5 counters off the Hive? Do you give the corp 10 credits by paying to break it? Do you do something in between? It's all bad, honestly.

Of course, this is assuming that Henry needs to trigger in order to be effective. In reality, if you put him behind something like a Spiderweb and a Data Raven then either they'll run it and give you the credits you want or they'll not run it and you can score out or whatever it is corps do with servers that aren't being run. He's cheap to rez, so if you're already running both tagging and multisub ICE (sup Muckraker) then you can get a fair bit of mileage if your servers are structured right. I'm not sure how many decks actually want that particular combination of ICE, though. Some kind of weird NBN Glacier variant?