When your turn begins, gain 1credit if you have fewer than 6credit.

Whenever you have 0credit, trash Dadiana Chacon and take 3 meat damage.

"You want untraceable funds? I'll lend, as long as you have the ability to pay me back."
Neutral • Micah Epstein • Earth's Scion 49
All sets:
Links: Decklists | ANCUR 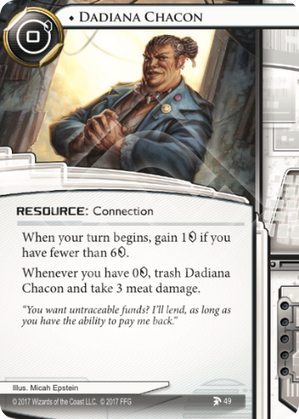 As economy engines go the loan shark isn't the best. Although she doesn't require 2 link like Underworld Contact or 2 free MU like Data Folding having a card that only works when you have between 0 and 5 credits at the start of your turn isn't great. And she's unique so you can get best get 1 credit from her per turn.

Oh, and should you actually get to 0 you get smacked around by her collection agents.

Not all that appealing.

Hang on, wasn't there some card that you want to take meat damage for? Clan Vengeance or something? It does work to get some counters onto Clan Vengeance, but it's still not a great deal. For taking 3 damage you get the ability to trash 1 card at random from HQ. Well, I guess it could work if you can get the corp agenda flooded and Jackson is out of the picture. And unlike most other sources of damage you can actually control this one.

I'm kinda surprised this isn't an anarch card since it fits well with the anarch theme of damaging themselves to gain power. But maybe FFG made it neutral because of its lower general power level.

Tip: I've Had Worse is good to have in your hand when Dadiana fires.

(Earth's Scion era)
Silv 296
Officer Frank too. But it is a crappy card. I had a possible plan floating in my head to use three of these, some other drip income, and Rubicon Switch. But since you pointed out that it is unique, that (probably crappy) plan is out. — quailman2101 26 May 2017
Worst Nasir card ever. 0/10 would not slot again. — phette23 26 May 2017
I assume that like Order of Sol, this will trigger if you play Sure Gamble with 5 credits in your pool. — quailman2101 28 May 2017
And I don't think its possible to use Order of Sol to gain 1$ and prevent Dadiana since Dadiana would already be in the queue upon hitting 0$ and resolves anyway. — LynxMegaCorp 29 May 2017
Probably worst downside: for this to work runner has to be in Bryan Stinson range — Deo 27 Dec 2017
1

Okay, so by "bad", I mean "hard to get benefits from." Because the first clause is totally fine: when you're poor the best thing is clickless money. Definitely something you want.

But a big problem is actually the Unique part. Much like Human First, only having 1 in play means you're not getting much money for your deck slots.

Obviously, taking 3 meat is pretty rough if this gets trashed. It's probably too much to want to combo it with Clan Vengeance or I've Had Worse. So you can protect it with something like New Angeles City Hall. You'd still be vulnerable to Hunter Seeker or Observe and Destroy.

What about preventing the damage? Plascrete or Guru Davinder would be a bit expensive, but an even better option is probably Crash Space! And you know what card also loves Crash Space??

No, not Account Siphon. Well, okay, yes, but not what I was thinking of. I was gonna say...Tri-maf Contact!! You could have an economy engine of 2x Crash, 2x Tri-Maf, and a Dadiana. Even if you got All-Seeing I'd, you'd prevent the damage first and wouldn't die. And you'd feel like a daredevil for having all these cards on the table. Style points!

Yeah, so that's a stretch. But it's an interesting alternative in a deck that doesn't want to spend influence and extra cards on MOpus. I'll definitely try it out at a casual meet-up.

Dadiana plays nice with icebreakers that don't use regular credits. So she is good with Faust as well as Smoke with a stealth rig.

Also, because playing Sure Gamble with 5 will cause Dadiana to deal meat damage, running Easy Mark or other cheap economy options may be warranted for the cautious runner.

Finally, both Personal Workshop and The Supplier allow runners to get cards out of their grip without worrying about taking damage from Dadiana. Just make sure that you have enough cards or credits after installation to survive the meat damage.

(Earth's Scion era)
YourGo 1
Most stealth icebreakers do use regular credits for part of their operation though. And Personal Workshop and The Supplier will rotate out in a few months so that doesn't bode well for Chacon moving forward. — Silv 31 May 2017
The Supplier is from the Lunar Cycle, though, so it won't rotate for a while now. And I meant that using stealth credits will help to mitigate the risk of Dadiana dealing damage, not eliminate it entirely. — YourGo 31 May 2017