Whenever you pass a sentry, you may trash the top card of the stack to trash one card from the top of R&D for each subroutine on that sentry that resolved. 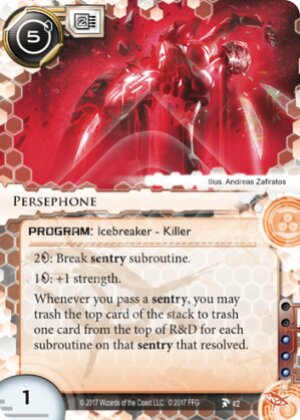 A dream scenario was presented to me last night.

Have 3 Diesel in hand.

Trash your hand to Komainu. Trash 3 cards from your stack to activate all three Persephones.

Rejoice in your one in a million play :)

Right now, this card is pretty terrible. As a breaker I will quickly run down its stats to remind you why.

Its MU intensive, its got a terrible breaker cost and 1 strength. If you want just a breaker, you are better off with almost any other sentry breaker out of Anarch. Cuj0, which is a card that has almost never seem play is a much, much better sentry breaker than this credit hungry monster.

So, this is at best a 5 cost, 2 mu back up sentry breaker. Which means there has to be a catch. And there is. Lets look at the other half of this puzzle.

"Whenever you pass a sentry, you may trash the top card of the stack to trash one card from the top of R&D for each subroutine on that sentry that resolved."

The ability on anything other than a program would probably be great for mill decks. Programs are notoriously vulnerable during runs due to the prevalence of program trashing effects. Meaning this card is both expensive and will very rarely fire.

Currently, the best opportunity you have to use this is with Sifr,) D4v1d,) Grappling) Hook or Shaper) programs) and events) that let you change the type of ice, just to open up more of the potential for targets) of the program.

With support, it could feed into a mill strategy and may even someday be a support piece in such a plan, but for now I am not convinced. Until DLR rotates, that offers a much, much easier way of doing a similar thing for far, far cheaper.

(Earth's Scion era)
Myriad 230
I think this is too janky and needs too many supporting cards to see any play. Unless the sentry is a tracer, you normally want to break it and this card is far too costly to be used frequently for breaking. That said, this would be very good against nuisance sentries like pup. — DGB123 27 May 2017
There are a few Sentries that this is vaguely workable against without support, but they don't really see much play. Veritas, Errand Boy, Gutenberg, Hunter, Pup. If you have link in your deck, some of those get better and you can add Caduceus, Uroborus, Vikram (click the first sub), both Sherlocks and Assassin to the list. Also Cortex Lock once your MU is full. Last but not least, if you have a giant handsize you can Hail Mary by running Komainu or Brainstorm for ENORMOUS mills. Overall though, I think you're right. It's rubbish until they bring out a runner card that can add subroutines. — Greasythumb 29 May 2017
this and some egrets could be fun — AspenFan 17 Jun 2017
Maybe Clan Vengeance would work here. Because as I see it, this card is two in one: a bad sentry breaker and a utility program that enables mills for firing sentry subroutines. So, I think this would fit into any masochistic deck that wants to get hurt to hurt the corp even more. Eat a lot of damage to mill and in case you encounter a program trashing sentry, use it to NOT fire that sub. — Hongkong Koma 24 Jun 2017
The Noble Path seems good with this — Lttlefoot 5 Dec 2017