click: Trash 2 or more cards from your grip. Run R&D or HQ. Whenever you access cards from that server during this run, access 1 additional card for every 2 cards trashed.

"Sure, the implantation was fine, but it pumps Burn. Did you think it wouldn't hurt?"
Anarch • Marius Bota • Station One 21
All sets:
Links: Decklists | ANCUR 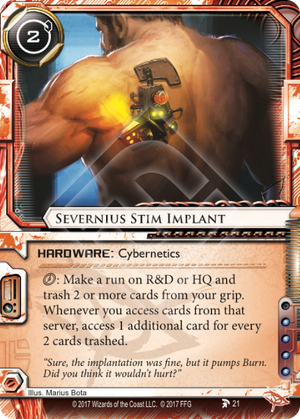 I really want to like this card. So far, the following tests have utterly failed:

1) Stim Dealer + Duggar's to initiate a mega-run with 15+ cards in hand. EDIT: You can also do this with Emptied Mind instead of Stim Dealer if you like living dangerously. Gives you a decent multi-access every turn.

3) Beach Party and/or Public Sympathy paired with something like Ekomind and the Sage/Savant/Adept breakers.

5) The console Obelus can help keep cards in your grip after your runs if you aren't going the Emptied Mind route.

No matter what I do, I keep ending up with something that's usually comparable to a The Maker's Eye on the low end, and to a Medium/Incubator dig on the high end. And those require far fewer pieces (and much less sacrifice in terms of deck destruction) to make work.

I'm hopeful that somebody else will find a way to make this work, because I love the flavor and I'd really like to be able to turn extra cards into extra access (sorta like how Faust turned extra cards into successful runs).

All of that said, of course, slapping #1 and #3 into the same deck is a LOT of fun. You'll lose, but you'll laugh the entire time.

(Earth's Scion era)
KitsuAeryn 292
This card did quite a bit of work for me. https://netrunnerdb.com/en/decklist/42228/burn-the-floor — LynxMegaCorp 7 Jun 2017
I personally think that it is not that great a card. Trashing two cards for just one extra access is generally not worth it. What if you hit a snare? I did see someone use this very successfully with 2 Hyperdrivers and Laguna Velesco District. But of course there are a lot of crazy things you can do with two or three Hyperdrivers in one turn. — quailman2101 7 Jun 2017
I think that should Public Sympathy and not Public Support — HollowsHeart 9 Jun 2017
Yessir, it should be. I'll try to correct that. In the mean time, I think Emptied Mind + Duggar's is worth a mention as an alternative to Stim Dealer if you like to live dangerously. — KitsuAeryn 15 Jun 2017
For the record: a few packs later Bug Out Bag was released which should help a lot in setting up a Severnius run. — Silv 4 Aug 2017
With the things still available post-rotation (and the absence of Medium), this card has become half-decent. It's also nicely multirole, it can do a deep R&D dig or pull off a large HQ access that would even make CI sweat. — cinnadream 18 Oct 2017
1

[NOTE: The following was written while I was under the impression that the extra accesses remain after the run. This is not the case as the UFAQ explains. I'm leaving this up for now so the comments make sense but please be aware that it's almost entirely wrong about the value of the card.]

Multi-access is powerful and there aren't really that many cards that provide it. Severnius Stim Implant is a powerful new tool, at 4 influence effectively only for anarchs.

It's a bit of a complicated setup. You first install it. Then at a later point you use the ability to make a run on R&D or HQ. At that point you have to trash cards from your grip (you choose which ones). For every 2 cards you trash you will access another card from the chosen server from this point forward. The run does not have to be successful in order to get the extra access(es) in the future and the extra access(es) already happen in the run you make with Severnius Stim Implant.

Severnius Stim Implant is hardware so it doesn't suffer from MU limitations like programs and isn't as easy trashable with tags as resources.

This is great. The big downside of Severnius Stim Implant is that you do a run with a reduced hand size which is potentially risky. Building up your extra accesses over multiple runs reduces that risk.

Comparing Severnius Stim Implant with Medium for R&D multi-access Severnius is weaker in the long run. If you can consistently get multi-accesses on R&D Medium will eventually snowball into a victory while Severnius doesn't profit from extra runs. Severnius does let you access extra cards in the run that charges it, which can be useful if R&D isn't easily accessible.

The closest thing anarchs have to Severnius Stim Implant for HQ is Nerve Agent, but that one will cycle out soon.

It's hard to predict how strong a card will be in practice just from static analysis of the card pool but I'm going to call Severnius Stim Implant a near-staple in anarch decks in the future. As a multi-tool for R&D and HQ accesses it's flexible and meets a demand in nearly every deck. The cost is slightly painful but nothing anarchs aren't used to (Faust). There's no obvious and widely counterplay to Severnius Stim Implant like there is to Medium in the form of Cyberdex Virus Suite. All that raises the power level of Severnius Stim Implant, though I don't think it's at the point of being overpowered.

(Station One era)
Silv 296
At present (see UFAQ) the ability only applies during the run it initiates. It doesn't stack and works like other single use click ability runs, e.g. Keyhole. — NINJC 26 Mar 2017
Yeah, it'd be crazy if the effect persisted after the run it was used on. As it stands, I see myself trying this card in conjunction with Emptied Mind. I've tried to make that card work a few times and have not had a lot of success. This might make it work though. — quailman2101 26 Mar 2017
Ah, ok, so the UFAQ is already there when the ANCUR page isn't up yet. Good to know, thanks. This info does blow my whole review out of the window, considering it I'd rate it somewhat underwhelming unless you can combine it some some kind of card that has beneficial effects when you trash cards from your grip. — Silv 26 Mar 2017