subroutine Trace [2]– If successful, remove a virus in the heap from the game.

One way to get rid of a virus is to get a nastier virus.
Neutral • Mariusz Siergiejew • Quorum 119
All sets:
Links: Decklists | ANCUR 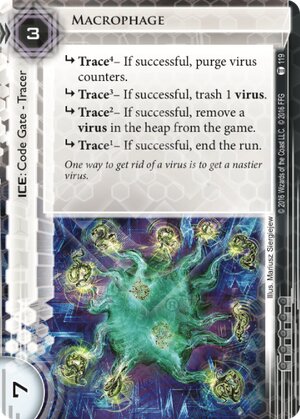 I actually came up with a card idea awhile back that was remarkably similar to this card. The differences being that my ICE didn't have the third subroutine and the strength was much lower but it also wasn't a tracer. My thinking was as follows: There are a lot of viruses. Many of them are extremely good cards. All of them have low install costs (all cost between one and three, not counting Crypsis). Sure there are a couple antivirus cards. But Cyberdex Virus Suite is the only one that is really played. And sure, it is a good card; you'll certainly be glad to have it when facing a virus heavy deck. The problem? It's almost a completely dead card if you find your servers un-assailed by malicious viruses. You may be able to bait a run with it or thwart a siphon, but in general, it won't help you. The solution? An antivirus ICE with a universally useful subroutine included. And here it is, Macrophage.

Here's a rundown on Macrophage.

It is a seven strength code gate with four subroutines. And it is rezzed for just three! That is amazing. To actually break this the runner is going to be spending a lot, nine with Gordian Blade. They could just let the subroutines fire but a runner with no link will have to spend at least 10 if they want to win every trace. This ICE is neutral with no influence cost.

-The first subroutine is great. Why? Because spending an entire turn to purge counters sucks. At a trace four, you have a good chance of winning.

-The second sub is awesome. Trash that Medium before another R&D dig. Trash the Parasite that's about to claim another victim. Or trash that stupidly annoying Datasucker (it really is one of the best runner cards in the game and costs far too little in install and influence costs). A trace three isn't bad; boost it if need be.

-The third subroutine is pretty useful too. Anarchs love their Deja Vu. It sucks losing two ICE to Parasites just to have the runner pick 'em both back up in one click. And because it fires after the previous subroutine, you should have a target to remove from the game.

These three subroutines can of course usually be totally ignored by the runner if they don't have any viruses. But now on to the last one.

-The last subroutine is both the best and worst thing about this ICE. It's great because it is always useful, whether there are viruses on the board or not. But it is only a trace one, yuck. Still there are ways to boost that for free. And if it ends up costing the runner only one to get through each time, that's not too bad for a three rez cost; not great, but not bad.

But wait! There are at least a couple of notable interactions with this ICE that go beyond its antivirus potential.

Aryabhata Tech: With four trace subroutines that will most likely fire, you can get a lot of work with just one of these installed, never mind two or three. By the time the first three traces are done, you may have a easy time landing the end the run subroutine.

Chief Slee: Again, since the subroutines will usually fire, Slee can smell the blood in the water. This seems to be an easy include if you are still trying to make her work.

I forgot to mention that the ICE I came up with also did not have such a clever name. I looked up Macrophage and found the following: They are a type of white blood cell that engulfs and digests foreign substances in the body. Certainly a fitting name for this powerful ICE.

(Quorum era)
quailman2101 247
In the absence of viruses, the last sub makes Macrophage at least useful for siphon defense. — vor_lord 12 Jan 2017
The biggest liability right now is Power Tap, but against that you just never rez Macrophage. — EnderA 15 Jan 2017
Played against someone last night that was using this and I had power taps out, was netting 3 creds every run. — YankeeFlatline 16 Jan 2017
4

It is worth noting that Macrophage combos great with Aryabhata Tech even (or rather especially) when your opponent doesn't run any viruses in his deck, because he has no incentive to fight the first 3 traces. Since this ice has 7 strength, it's trace subroutines are definitely going to fire. So he will lose and you will gain 3, and then he will have to beat your trace when you fire your last subroutine. So now we have 3 virus wrecking, taxing, money making, end the run code gate. What more do you want?

(Quorum era)
XoXoX 71
And Chief Slee :D (sounds like a joke, but works surprisingly well) — Krams 28 Jan 2017
I dont know about that, slee would get 4 counters, that one short from the magic number, its a little clumpsy to use — XoXoX 28 Jan 2017
That's just about 5 meat damage for 5 credits on one ice encounter, where Scorched would require a tag, 3 credits to spare and < 3 cards in grip, and is usable once. — LynxMegaCorp 29 Jan 2017
1

The usual reviews for this have gone up for this particularly good piece of ice, albeit in specific situations (when the runner is using virus cards). So now, I'll talk about a hilarious weakness I found for this ice, as a runner, while I was running a Medium. Note to corps, look out for this card combination:

A peculiar situation, but hilarious should you find yourself in it as the Runner, and soul destroying as the Corp.

P.S. It's possible I got the exact math wrong, but basically you drain the corp a lot, and you gain a bunch of credits.

(Station One era)
Scoogsy 84
I guess it can generally be said that rezzing tracer ICE against Power Tap is not necessariy a good idea. — campino 20 Apr 2017
I think the bigger point is that tracer ICE with subroutines that the Runner can afford to fire are a bad idea against Power Tap. Most traces are for stuff like tags, damage, or program trashing, so it's not a big an issue. Macrophage, though, can be safely bounced off repeatedly for $$$ — LordRandomness 25 Apr 2017