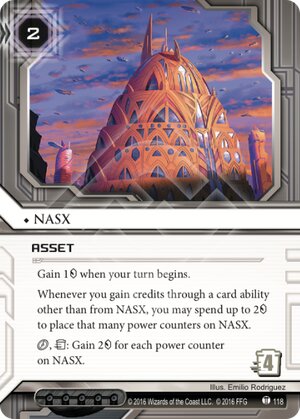 Gain 1credit when your turn begins.

Whenever you gain credits through a card ability other than from NASX, you may spend up to 2credit to place that many power counters on NASX.

click,trash: Gain 2credit for each power counter on NASX.

The obvious point of comparison: PAD Campaign. They're matched in rez and costs, so they share the same function as a stable source of . As a Unique card, you can't blanket remotes with it, but otherwise you can treat it like a PAD with a bonus ability. And it's a very nice ability: Feed money into NASX, and get twice as much back when you're ready to cash out. Keeping in mind that any economy that isn't clicking for credits is probably a card ability, NASX has the potential to keep up with some of the biggest moneymakers in the game. Let's consider a few scenarios:

Those numbers don't account for the net 1 and 1 cost to get NASX on the board in the first place. You'll either need to mitigate the rez cost (Mumba Temple, Stock Exchange) or give it some time as a PAD to reach full value. The key is the versatility the card offers: basic drip, one-shot burst, and long-term investment. It's a convenient economic lubricant, serving whatever purpose your finances demand. If your deck would even consider a PAD Campaign, NASX is probably a very good option.

Natural Enemies: Rumor Mill and Political Operative. These cards aren't particularly troubling if NASX was operating in PAD mode, but they can turn on the pain if you had already put some money into it.

(Quorum era)
Zeofar 6
Hedge, Hedge, Clear NASX is a pretty good turn if you can get it. 16 credits in one turn. — FightingWalloon 19 Jan 2017
You need to mention Weyland BABW. Each transaction triggers NASX twice. — Myriad 21 Jan 2017
Rez NASX, hedge, hedge, clear NASX is just 10. -2 rez, +8 from hedges, -4 from loading NASX, +8 from clearing NASX. You probably want more loads than that. — michaeln 27 Jan 2017
If you can protect it long enough, becomes a beast from Corporate Sales Team too. — LukeAriel 30 Jan 2017
Erm... I think you guy's math is off on this one. NASX is useless for any effect that grants only 1 credit, because it costs 2 to activate the ability--if you store a 1-credit effect, you are spending 2 now to gain 2 later, which just means you break even. For Hedge Fund, remember that it grants +9 credits, not +4--it just nets 4 if you play it normally. If you Rez NASX, Hedge Fund, Hedge Fund, clear NASX, it would cost 16 credits (2 to rez, 5x2 to use both Hedges, 2x2 to use NASX's ability) to place 18 storage counters on NASX, which would yield 36 credits, making for a net of +20, or roughly +16 if you account for the 4 total clicks spent achieving this combo. — Legitamte 16 Feb 2017
@Legitamte you're misunderstanding the card. You play up to 2cr to put -that many- (up to 2) counters on NASX. — Brendan 17 Feb 2017