If Sapper is accessed from R&D, the runner must reveal it.

There is a special place in hell for the first person who mined cyberspace.
Weyland Consortium • Adam S. Doyle • Martial Law 98
All sets:
Links: Decklists | ANCUR 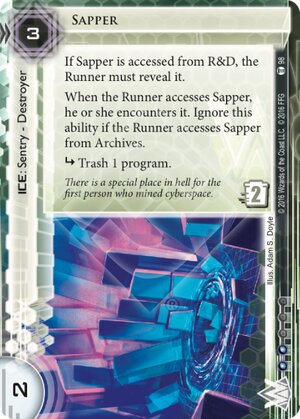 The important thing about sapper is that it exists...

Sapper is the first trap that you can fire from R&D/HQ that can trash a program (and this is where it shines tbh, it is a really crappy piece of ice - i shall retract this statement i was bitter about mimic at the time) , and as easy as it is to play around (by having a killer) you still have to play around it which is what makes this card important.

Having played sapper a reasonable amount recently, this card really shines in decks that aim to rush. It adds an extra layer of psuedo gearcheck. Against rush decks, most players will focus on finding their fracter early. Sapper means that central pressure without a killer installed becomes risky buisness. The combination of these two things means that sapper has the effect of slowing down runners that play around it whilst losing the corp no tempo and doubling up as a decent enough piece of ICE.

(Martial Law era)
willsta 90
I think it's unfair to say it's a crappy piece of ice. It's the cheapest to rez program trashing card in the game and can't get evaporated by Parasite. That makes it pretty decent already. — RubbishyUsername 19 Dec 2016
Yeah, it's break/rez ratio is better vs. Mongoose than Cobra or rototurret. — Waltzard 20 Dec 2016
It only does anything when a program is installed. This is a good tool when most of your ice are barriers and code gates. If so, then the trap effect is useful on centrals. A good use I had with it was when running grail ice. Lancelot is usually best kept in hand anyways. — Severijn 14 Jul 2017
2

This card is interesting, but I think it has some serious problems.

If the "when accessed" bit is firing, then they are getting in to the central servers, and that means one of two things: Either there is no ICE protecting them yet, or there is ICE, but they can break it. Neither of these are really great scenarios for Sapper.

So really, it's only going to get to fire during that thin sliver of the game where the runner has installed programs, but doesn't have the tools (or credits) to break Sapper.

The tax on it is pretty pitiful. Even if they are forced to break it, it's not going to be very costly. Sentries aren't usually cheap to break, but 2 strength is not terribly frightening. A lot of sentry breakers and AIs start at 2 strength.) Tax-wise, the best you can probably hope for is to make them spend 3 breaking it with Mongoose or possibly burn a Faerie.

On the other hand, this IS the single cheapest piece of ice we've seen with a "Trash a program" subroutine. Rototurret and Cobra are 4 each, although they also have additional subs. (although even less strength!)

I could see this ice being useful if Marcus Batty ever recovers from the severe drubbing he's currently receiving at the hands of Rumor Mill and Interdiction, but at the moment, it's hard to get too excited about it. Chrysalis is an obvious card to compare it against, but Chrysalis just seems better, as its subroutine is still useful, even in the rare phase of the game where it is likely to get to fire.

(Martial Law era)
Bwob 437
Might work decently v. Mongoose. If they have already broken through a sentry on the way in, they won't be able to break this. — quailman2101 17 Dec 2016
Killing Mediums seems to be the most likely effect you will get out of this. True, late game most runners will have a killer, but early game and with an unprotected R&D this can be devastating. Also, some people trust in Mongoose/Nexus as their killer, and you can punish them for that if they already used up the single usage. — adquen 20 Dec 2016
On-access trigger is mostly good for halting YOLO medium digs when you don't get stopping ICE in front of R&D. But the other nice thing is that this and other new Weyalnd ICE start making you question the old maxim that face-checking Weyland ICE was safe because usually worst case you lost a click to Engima. — madrabbit 10 Jun 2017