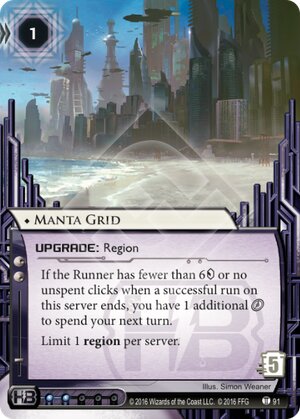 If the Runner has fewer than 6credit or no unspent clicks when a successful run on this server ends, you have 1 additional click to spend your next turn.

Illustrated by Simon Weaner
Decklists with this card

So what's nutty with this card that differentiates it from Nihongai Grid is that "no unspent clicks" clause. That allows you to use An Offer You Can't Refuse for a "damned if you do, damned if you don't" effect: give the corp an agenda point, or let them score an agenda out of hand next turn. Any sensible runner will let you do the former unless it will win you the game, and if 1 point is enough to win the game Manta Grid ensures you win the next turn. Manta Grid is the most realistic and effective combo you can run with An Offer You Can't Refuse, granting you a Biotic Labor at less influence or a 1 point agenda for fewer clicks.

How to use this: Harmony Medtech: Biomedical Pioneer. Between Medical Breakthrough, Clone Retirement, Braintrust and Philotic Entanglement, getting to 5 points has never been easier, and Manta Grid lets you close the deal without taxing that 12 influence too highly.

(Martial Law era)
RubbishyUsername 434
This only works if the runner doesn't have the money to just trash Manta Grid outright during the run. — HollowsHeart 10 Dec 2016
Also doesn't works if the runner runs, but hits an "end the run" subroutine during the run. He can't jack out, but he doesn't have to succeed. Though this limitation can be overcome, if the corp rezzes Manta Grid after the last piece of ICE has been passed. — tokeeto 10 Dec 2016
That's not correct HollowsHeart, Lukas previously clarified that once triggered, abilities exist independently of the source. If the condition was met when the run was successful, the Corp gains a click next turn even if Manta Grid is trashed. — thehelm 22 Dec 2016
Ah...just realised...it says when a run ends. Apologies, you're right. — thehelm 22 Dec 2016