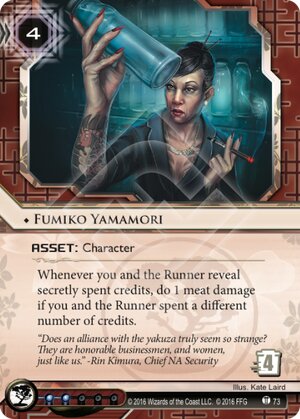 "Does an alliance with the yakuza truly seem so strange? They are honorable businessmen, and women, just like us." -Rin Kimura, Chief NA Security
Illustrated by Kate Laird
Decklists with this card

I've been playing around with a Nisei Division: The Next Generation deck since Intervention was released, and I think Fumiko Yamamori (along with Hyoubu Research Facility) really makes it sing.

Rezzing this and Hyoubu during a run can really twist things in your favour. Playing as Nisei with this combo, the best possible outcome of winning a Caprice psi game delivers a 2 credit drain for your opponent, 1 credit gain for you, 1 meat damage and an ETR. Not too shabby!

I can't imagine this will see any play out of faction, but it could find a home in plenty of Jinteki decks. It won't win you a game outright, but it's definitely an extra headache for your opponent.

No-one was asking for a boost for Nisei, but I'm glad they've given us one!

Two words, for this lady: Psychic Field. Rez her in the Jackson window, and watch the Runner play for their lives...

More reliable than the Prisec combo, as that one relies on BOTH winning a Psi game and getting lucky with the runner's access order.

(Intervention era)
HolyMackerel 1051
Actually a nombo. Fumiko is triggered at the "Reveal spent credits" step of Psychic Field, so her meat damage completes before Psychic Field counts the runner's grip. — Toper 15 Nov 2016
You sure about this? As a corp, don't you choose your own trigger orders? You reveal credits. both Fumiko and Psychic Field happen, and you choose the order. — HolyMackerel 15 Nov 2016
I suppose it depends on whether "If you and the Runner spent a different number of credits..." counts as another ability triggered by 'Reveal spent credits'. I think it doesn't, but I could be wrong! — Toper 15 Nov 2016
The wording is kinda weird. I'd say these go as separate triggers in the same moment, so Corp would choose the order. But I've been wrong before. — H0tl1ne 15 Nov 2016
It's a moot point, triggers are stacked by the active player IIRC so the Runner stacks the triggers since it's tue Runner's turn when they access the field. — LordRandomness 15 Nov 2016
@LordRandomness, the rule is that players choose the order of their own cards' triggers, but the player whose turn it is has their effects happen first. — Toper 16 Nov 2016
I thought of this a few days ago, along with Chetana, and did some research before making a deck. The FAQ says under Chain Reactions, "If during the resolution of an ability another ability meets its trigger condition, then a “chain reaction” is created. The ability that just met its trigger condition resolves immediately following the active effect on the current ability. If this ability results in another ability meeting its trigger condition, then that ability is also “chained.” Resolve all the abilities from the most recent trigger condition before continuing." So yeah, the meat damage happens first. I'm actually glad about this,as the Psychic Field/Prisec combo is pretty dumb. — quailman2101 16 Nov 2016
I just realized that I read this incorrectly. I still am not sure though. I think I agree with Toper's original comment. — quailman2101 16 Nov 2016
The way i'm reading that the triggered condition ability resolves after the effect that triggered it is done — LearnedFool 15 Dec 2016
According to the latest version of the FAQ (ver. 4), this combo works now. Fumiko triggers after Psychic Field! — moks 22 May 2017