If the Runner is tagged, Crisis Management gains "When your turn begins, do 1 meat damage."

"For the duration of the emergency" is code for "this is the way things are now."
Weyland Consortium • Natalie Bernard • 23 Seconds 18
All sets:
Links: Decklists | ANCUR 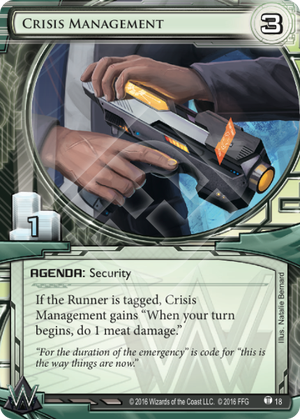 This might well be the worst agenda in Weyland, which is hard to believe..

The first thing to note is that it is a 3/1. 3/1 is a terrible profile for an agenda, and demands a very good effect in order to play it. Very very few 3/1 agendas of any type ever get played, even in factions that are better at scoring agendas than Weyland is. Contrast with 3/2, where Merger shows how strong the setup is....they printed a worse-than-blank 3/2, and it might see some play. 3/1, by contrast, is an agenda graveyard.

In Weyland we spend 6 agenda points on Oaktown Renovation, 6 points on Project Atlas. (Blanket statement, but I'm mostly right. Some hot tub decks or punitive decks rely on 5/3 instead) Depending on your prefs the remainder might be some combination of Global Food Initiative , Hollywood Renovation or what have you. Usually we take 2 5/3 of whatever provenance, and then a pair of Hostile Takeover.

So a 3/1 is trying to bump into that suite. Replacing a hostile is really hard. Hostile scores from hand, and also doubles as a turn where you make 5 creds. A 3/1, by contrast, has to sit on the table for a turn, and then takes a whole turn while costing you 3 creds. It is a tough sell.

Argus is one of the few places where you see the 3/1 's of the world show up., as the ID works off the runner stealing lots of agendas. Mushin No Shin on Posted Bounty is a straight power play. If they don't run it you can clicklessly tag them whenever you want. If they run it it might be a Project Junebug or similar ambush. Chronos Project is an example of the kind of 3/1 that sometimes gets used by Argus.

Firmware Updates in Titan deserves a mention, with Mark Yale selling the creds, turning it into a sort of high risk, high reward Hostile (have to leave it on the table, but makes more money and no bad pub).

So there is very little room for even the strongest 3/1 in Weyland. (I recognize that I've spent a lot of time on this review and haven't mentioned the card beyond it being a 3/1...that's not a wrong way to think, I believe) The deck has to be a bit of an odd duck and the 3/1 in question has to be Chronos level mighty.

How does Crisis Management stack up? Well, if the runner isn't ending their turns (against WEYLAND!) tagged, it is a blank 3/1. This is really the end of the part of the review that means anything. Runners don't end turns tagged vs. Weyland, so this is a blank 3/1. Blank 3/1 isn't worth playing.

But let's indulge this card. What if the runner is letting you start the turn with a tag. They suck down that meat damage. You've got your 2 Scorched Earth on line. How does this change things.

It is incredibly situational. You are probably better with one of Weyland's other 3/1's that never get played (Hey Vulcan Coverup !), and that is saying something.