When Improved Protein Source is scored or stolen, the Runner gains 4credit.

They eat us, we eat them, the cycle goes on and on. -Omar Keung, "the Flashpoint"
Jinteki • Johnny Morrow • Fear the Masses 105
All sets:
Links: Decklists | ANCUR 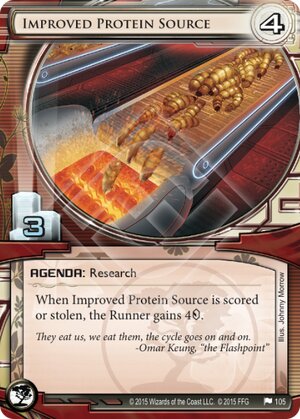 This card is made for Tennin Institute: The Secrets Within.

As Tennin Institute: The Secrets Within, your ability basically makes it so that you can score 4/2 agendas as 3/2 agendas after installing once, face down on the board. So now, with the release of Improved Protein Source you can rush out a 4/3 agenda!

Because you could potentially win after scoring another 4/3 (because of "Clones are not People") the runner has to check that one remote, or run more aggressively (have successful runs) after you install anything new in there that isn't an upgrade if they don't want to lose. And that's when you put your Snare! in the remote server.

If they're being aggressive and can get into (like archives for some reason). You can still win without your ability with an unadvanced improved protein source if you have two advancement counters and Trick of Light at that point as well.

(23 Seconds era)
debraken21 46
I really really really want to play this card out of Tennin but I am just not brave enough to play a 3-pointer that not only doesn't protect itself but actively sabotages you. — Sanjay 1 Dec 2016
5

Seven easy steps to profit, and your place in political suprema ~ ahem making the world a better place!

Step 4. "Clones are not People"

I even made it into a deck. In all fairness, it's not even that bad!

And you can already taste the flavour!