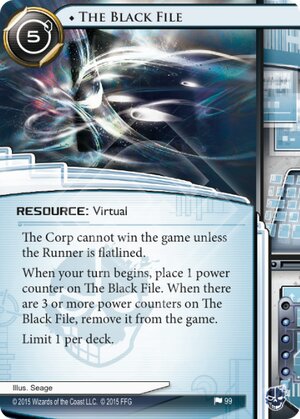 The Corp cannot win the game except if you are flatlined.

One major thing needs to be understood about this card. It stops the corp from WINNING the game by having 7 points, it doesn't do anything to stop the corp from GETTING to 7 points. It doesn't stop them from advancing or scoring at all (like clot and price of freedom), so if they have an agenda in hand or on the board, Black File does nothing to prevent them from scoring it and saying "I win" 2 turns later. That means it's only useful in an extremely close game where you both are at match point and you need 2 extra turns to try to make sure they don't score first while you dig for the winning agenda.......and it costs you 5 credits. Plus it's only 1 in the deck, so the consistency of this card is very weak. It can feel great when it works, but very rarely will you have it in hand AND need it AND have the extra money for it at the same time. It's nowhere near reliable enough to be put in a serious deck. Disappointing, I know, but true.

I suspect that this card will ultimately prove to be a very influential and powerful card, an auto-include in criminal and worth considering splashing in the other factions.

This is, to be sure, a tall order. But the alternative is defeat. In a close game, is 8 clicks enough time to make your way into R&D one more time? Remember, it is only the Corp that can't win during this time. You can absolutely win yourself. This can lead to hilarious situations. Imagine the Corp losing 7 to 7, or, heck, 8 to 7.

First off, the best use of the Black File would be to have a way to install it as a paid ability. Put it on a Street Peddler or what have you. That way if the enemy isn't going to win you don't have to pay for it, and if you do end up installing it you don't lose a click putting it down. In this case you'd use it like you'd ordinarily use a clot.

Next, the Corp is not entirely powerless during these 2 protected turns. It is easy to imagine them staring at their 7 agenda points and just taking creds and adding ice, but they do have an alternative. If they can tag you there is nothing about this card which keeps the Corp from trashing it.

Also, this is a virtual resource, and therefore Apex can use it. Hard to imagine he has the influence to spring for this, but the possibility is there.

(Fear the Masses era)
Waltzard 373
"In return for one click and 4 creds..." It's 5 creds, not 4. — lunchmoney 21 Jun 2016
Thanks, corrected. — Waltzard 21 Jun 2016
It would be pretty funny if the corp scored Helium-3 Deposit as it's last agenda when this was on the table with 1 counter. The corp wold win as soon as the runners turn started. — quailman2101 21 Jun 2016
Surely this gives you three turns? You play it the turn before they win, you then get an extra turn with 1 counter, an extra turn with 2 counters, and because it trashes on your turn when the corp cannot score agendas you then get a third turn when it trashes itself. — whirrun 22 Jun 2016
My thinking is that they score up to 7 during either the 1 counter or 2 counter turn, then win immediately when it trashes itself. — Waltzard 22 Jun 2016
Wait, am I missing something, or you can keep this on board infinitely with Dr. Lovegood? — daiver19 23 Jun 2016
Now I've realized you would still lose, but the good thing is you don't have to wait for a moment corp can win, you just install this whenever it's convenient. — daiver19 23 Jun 2016
1

Do your thing for remaining three clicks and next 2 turns.

On the turn you would place the third counter on it sell it to Aesop's Pawnshop instead.

Somehow bring it back to hand.

Get killed by BOOM! or Jinteki.

edit: this wont work as pointed out below. Sad panda :(

(Crimson Dust era)
lunchmoney 266
the moment it gets trashed the Corp can win by points they scored while it was active, so you can't extend the duration by recycling it. — Krams 24 Oct 2017
Good point, well made. :( — lunchmoney 24 Oct 2017
What if, instead of selling Black File, you trash it by installing another copy of it? — HollowsHeart 24 Oct 2017
One per deck. — lunchmoney 24 Oct 2017
Now this review is stuck here for all eternity... — NoSoup4you 25 Oct 2017
To add something that has not been mentioned, this can be spicy in a Leela/Gang Signs deck as now the corp has to care about the last agenda they score as well. — Oooer 25 Oct 2017