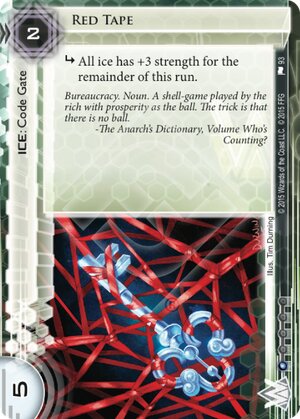 subroutine All ice has +3 strength for the remainder of this run.

Bureaucracy. Noun. A shell-game played by the rich with prosperity as the ball. The trick is that there is no ball.
-The Anarch's Dictionary, Volume Who's Counting?
Illustrated by Tim Durning
Decklists with this card

So people I have been speaking with say this card is an "objectively terrible" piece of ice. I think I have to disagree. Admittedly, it is niche, and requires positioning. But think of it this way, purely from a cost standpoint. Right now the cost to you is 2 for the rez, 2 to put it in an optimal position as your third (outtermost) piece of ice in a server, and 1 to install it. The cost to a runner, on average to break this ice is 4. If they do not break the ice, and let it fire, as long as you have 2 ice behind it with a strength greater than two, it now becomes a 6 tax. And then what can they do, Inside Job it? Thats still 2 and one run.

Could this ice have been better with a Builder Move to outtermost position ability? Yes. But there are other ways to move it like Tenma Line, Sunset, or Mumbad City Grid. Its niche, but dont discount it outright.

(The Liberated Mind era)
Catsodomy 67
Definition: objectively terrible -- it is niche, and requires positioning doesn't actually stop the person from just using a parasite and making it wherever they want to go. — Goldstep 6 Jun 2016
If you are being Objective, this is a terrible piece of ICE. If the runner is using D4v1d they can either ignore this ICE and just break the next one or they can spend their D4v1d counters on the next ICE. For Faust it will just cost them 1 card and 1 datasucker counter more to beat the next piece of ICE. Against shapers Cyber-Cypher and Torch are pretty cheap solutions to Red Tape. Oh... and it suffers from all of the problems of Chum - runner can choose to jack out after encounter and it clogs up the corp's hand since they can't install it until they have already ICE'd up a server at least once. Also note that the 'savings' made in terms of rez cost is already LOST upfront due to the installation cost! — Zakalwe 7 Jun 2016
It feels to me like the worthwhile comparison is Wendigo. Red Tape is very similar. It is a 2 rez cost code gate that wants to sit in front of an ETR. — Waltzard 7 Jun 2016
Didn't mean to end last comment there. Anyway, you can probably guess the rest. Wendigo is generally better than Red Tape (it can swap types, negating program much more likley to stop runner than +3 strength). Red Tape is probably only worth thinking about if you've already got 3 Wendigos. — Waltzard 7 Jun 2016
The art is amusing though (it ties up Yog.0!) — LordRandomness 10 Jun 2016
2

The Weyland Chum as it were, a neat Code Gate with beautiful artwork that will simply struggle to find a space in competitive decks. The biggest issue with this piece of ICE is not the positioning requirements, but the lack of impact the ability has. Strength 5 Code Gates are automatically attractive, but one that can allow itself to fire with no immediate consequence to the Runner may not be pulling enough weight to justify its existence. It doesn't help being native to Weyland, a faction that primarily consists of pumpable barriers.

Factor the install cost of the ICE vs the Rez Cost, vs holding onto it to wait for that Archer you're desperate to install in front of, and your focus has turned from making this a potentially taxing card to devoting set-up just to make this work. It's not worth it. The value in Chum at least stems from the threat of a kill in a faction that runs low-strength, multi-sub, dangerous ICE. Jannkmasters will always have a nice combo in mind with Red Tape, but tournament decks aren't going to see enough value to replace gear-check ICE with a card that isn't impactful enough, and will inevitably be cheaper for the Runner to break the next ICE at +3 strength than break Red Tape.

(Escalation era)
Mechanoise 1570
I feel like you got to mention Wendigo. It is the same rez cost, also a strong code breaker (1 less str), but instead of costing 3 more, it makes them unable to break the followup ice at all. Much better card, same role, same faction. Can even swap types. Red Tape isn't going to be used until you have 3 Wendigos, and even then you might look at Builder first. — Waltzard 26 Oct 2016