Search R&D for any number of copies of a card, reveal them, and add them to HQ. Shuffle R&D.

It's the exact same coffee, but the price sure is different.
Neutral • Tim Durning • Salsette Island 75
All sets:
Links: Decklists | ANCUR 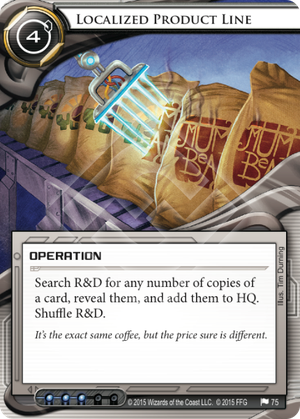 Localized Product Line is going to be the basis of a lot of combos, but just like Accelerated Diagnostics, it needs support cards to make it work.

The biggest limitation of LPL is that the corp must reveal the cards to the runner. This means tipping the other player off to the corp's intentions. This information makes it imperative that whatever operation based strategy is implemented in the same turn. This means using cards that give additional clicks.

Subcontract is an ideal combo piece as well.

Out of additional possibilities such as Efficiency Committee and Biotic Labor also arise, potentially allowing for fast-advancing a Vanity Project with a triple Shipment from SanSan.

Research Grant might verge upon usability with LPL, especially using a Jeeves-MirrorMorph-Shipment from SanSan combo, but the corp will spend the previous turn with 3 Agendas in hand, unless they use Biotic Labor to kick things off. A two-turn play might install one copy the previous turn and then triple advance the next turn, using Jeeves to MirrorMorph the other two copies before scoring all three.

Another interesting play is adding 3x Snare! to HQ and then playing An Offer You Can't Refuse. The corp can even spend the 3rd to a resource with the Snare! tag. With HQ Interface installed it may even be a flatline play.

Jackson Howard and/or Museum of History also combos with LPL to return up to 3 spent cards to R&D so you can use tutor them back to HQ.

(Salsette Island era)
Zakalwe 467
[Punitive Counterstrike](/en/card/04079)? — taneru 2 May 2016
For the Research Grant play, if you had a Lakshmi SmartFabrics on the table you could prevent the runner from stealing any of them. — hbarsquared 3 May 2016
Snare! "Stay out of our goddamned headquarters" - Replicating Perfection :P — Dapperghast 7 May 2016
This card is Reclamation Order's best friend — Hongkong Koma 25 May 2016
How about using a single copy of this card along with a single copy of Consulting Visit and three copies of Mumbad City Hall? — SerBrofist 7 Jun 2016
I love Punitive and Snare! — rezwits 2 Mar 2017