The naja naja is the king of all serpents.
Neutral • Liiga Smilshkalne• Salsette Island 74
All sets:
Links: Decklists | ANCUR 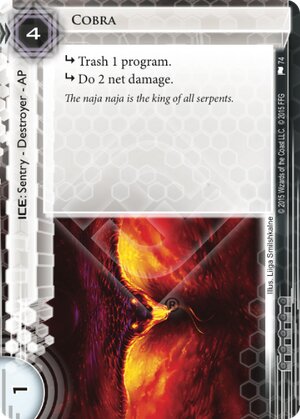 The card that Cobra is closest to is Rototurret, another 4-to-rez, low strength sentry that kills programs. The difference here is that Cobra is a neutral card (although Rototurret is relatively easy to splash) and it does 2 net damage instead of ending the run.

I think this card is most useful in a deck that already wants to be doing damage. Jinteki seems like the faction that could use this card's effects the most, as it doesn't have access to much program trashing in-faction, and the damage is welcome, perhaps even moreso than a hard ETR. On top of that, this card is very good with Marcus Batty, as you can trash their sentry breaker after it is possible for them to jack out, forcing them to run into the subroutines.

The downside is that it is in Mimic range, and has a strength of 1, meaning it's pretty easy to kill with Parasite and only costs 2 to get through with GS Shrike M2. The upside is that this can be a very powerful facecheck-punishing ice that you can play in any deck and combines well with Batty as previously mentioned.

(Salsette Island era)
bracketbot 58
I love how the stats perfectly line up with Mongoose so that it's 1 credit to break. — TKO 29 Apr 2016
@TKO: Oh wow, that's so good. — Vaslav 1 May 2016
Nothing gives a corp player more joy than landing punishing subroutines. This means Cobra now has double the fun of Rototurret. — Zakalwe 2 May 2016