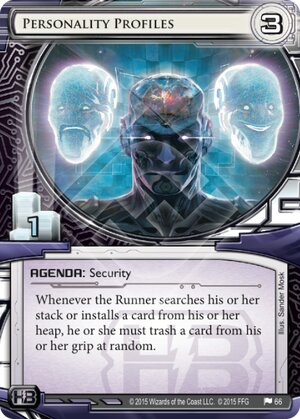 Personality Profiles will totally shut down inconvenience any runner attempt to search their Stack or install a card from Heap. Although this card is targeted against decks it can also impact and decks too.

It can put the hurt on annoying Shaper plays but is almost a dead card against the other two runner factions. Now dead cards are tolerable when they are vital in your meta and can be discarded against irrelevant match ups but not when it's an agenda.

As a 3/1 that gives maximum value when scored early Personality Profiles asks a lot of the corp. It asks the corp to invest 1 card, 4, 3 and a scoring remote to bring it into action. It also risks an Agenda point for the runner as well whenever it is stolen.

Generally I think Chronos Project is a stronger choice since it completely eliminates any recursion of removed cards. However against the highly popular Hayley ID Personality Profiles could have a high impact, since the card that is discarded could be the one that she was planning to install with her ID ability.

Note: It is possible to play around this effect by installing with an empty Grip, but that is hardly a safe way to play.