Whenever you rez a card in or protecting this server (not including Surat City Grid), you may rez another card, lowering the rez cost by 2. 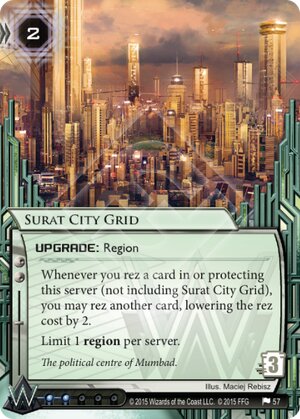 Finally the dream of using Brain-Taping Warehouse to rez your Bioroid ICE at the beginning of the runner's turn is real! You can also use it to chain-rez any ICE that costs 2s, or less, for rapid glacier deployment, that works during the run. Also works on upgrades and assets - so rez that cheap ICE, then follow it up with Caprice Nisei and Ash 2X3ZB9CY!

(Democracy and Dogma era)
CactusJack 117
Interestingly, there is no paid ability window before the very first click -- i.e. between 1.2 and 1.3. So Brain Taping can only reduce cost by 3c? — axiomatic 8 Apr 2016
Check out the new FAQ . It is — dvdvcdcd1 8 Apr 2016
The card you rez per "you may rez another card" is not restricted to being in the same server as SCG. So you could potentially rez a SCG on R&D when the runner runs there, rez the approached ICE then rez that Ash in the remote. If the runner continues the run you could do the same on the next piece of ICE: rez it, then rez that Caprice in the Ash-server (or an ICE protecting HQ, or what have you). — kollapse 8 Apr 2016
I can see this being useful in NEXT builds as it'll help you get em all rezzed quickly and cheaply. — quailman2101 11 Apr 2016
It was pointed out in another comment section, but this card combined with a proper little setup for it can be used to counter [Blackmail](/en/card/04089) of all things, due to the fact you can use it to rez a card (any card) outside of the server where Surat is installed in. So you could have some fun counters with Blackmail when they aren't expecting it. — Aryn 16 Apr 2016
Disregard my last comment; forgot that 'Cannot' overrides it from Blackmail. — Aryn 16 Apr 2016
@Aryn Your comment's fine, you just can't pull that trick during the Blackmail run itself. — daytodave 22 Jun 2016
Now that Haas-Bioroid: Architects of Tomorrow is out, and I've gotten some more play with this card, I realize that I've been limiting myself by ONLY thinking about the BTW+SCG combo. SCG can be crazy good. Combo it with Executive Bootcamp and you can chain rez like crazy. If you build horizontally, you can chain lateral ICE rezes. It works with other HB cards: Howler, Awakening Center, Minelayer, ABT, Eliza's Toybox, Lateral Growth. You can get what I'd call loops with cards like: Advanced Assembly LInes, Localized Product Line, Tech Startup, Interns. And lets not forget, it works with Priority Requisition. Oh man, I'm blowing my own mind! — CactusJack 18 Nov 2016