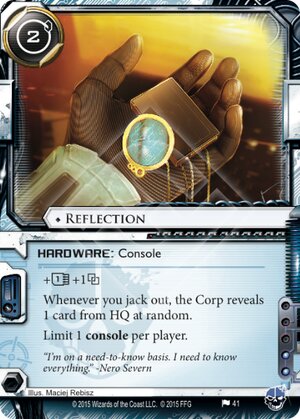 Whenever you jack out, the Corp reveals 1 card from HQ at random.

"I'm on a need-to-know basis. I need to know everything." -Nero Severn
Illustrated by Maciej Rebisz
Decklists with this card

Reflection is a Console that gives +1 and +1 for just 2. This compares quite favourably to Dyson Mem Chip if we were just to treat this as a normal piece of hardware.

However Reflection will take up your console slot so the big question is which IDs is it best suited for?

It's supposed to be played with Nero Severn: Information Broker where it will turn on Underworld Contacts for some beautiful drip econ, as well as synergising with Nero's jack out ability. In Nero Reflection would be a big boost for early pressure, being very cheap to install and helping Nero to time runs with Legwork or time the installation of a HQ Interface.

This is also a fantastic econ card for Iain Stirling: Retired Spook, letting him set up Data Folding and Underworld Contacts very cheaply. However it does deny him the use of Logos which is an important card in common Iain builds.

A new archetype may be emerging however leading to a revival of Andromeda: Dispossessed Ristie who can also make use of Underworld Contacts. Andy was hurt by the MWL rounding up her favourite console: Desperado (not to mention Yog.0 as well). Combining Reflection with multiple Au Revoir can potentially earn 3 per run and reveal pieces of the Corp's hand. Maybe a Snitch really is a girl's best friend.

*Note: Corp can in fact Power Shutdown or SEA Source + Bad Times. I doubt this is a realistic threat however.

**Rules clarification on Snitch: Since the runner jacks out before step 2.3 the corp cannot rez the Ice. This means that unless the corp has Ice rezzing abilities (Accelerated Beta Test, Priority Requisition, Executive Boot Camp, Eliza's Toybox, Oversight AI, Bioroid Efficiency Research etc.) you can use the Snitch/Au Revoir combo all day long. Crescentus and Emergency Shutdown will also derez Ice as well. All you need is a piecce of unrezzed Ice on any server after all.

(Democracy and Dogma era)
Zakalwe 473
Jinteki can score out three Ancestral Imager to discourage Au Revoir/Reflection abuse. ...though I'm not sure why they would. — GrantZilla1979 25 Apr 2016