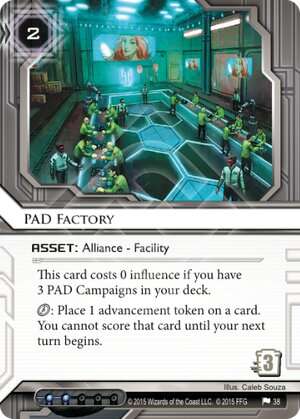 This card costs 0 influence if you have 3 PAD Campaigns in your deck.

click: Place 1 advancement token on a card. You cannot score that card until your next turn begins.

Illustrated by Caleb Souza
Decklists with this card

This card didn't really make a splash in the Mumbad Cycle, and that's likely to continue into the future, but in a more casual environment, you might consider including it in Weyland Consortium: Builder of Nations. You will probably, at some point, have to include non-advanceable ice in your deck - PAD Factory ensures that even those ice can maintain Builder of Nations' meat damage ping threat.

PAD Factory is a card I've had a lot of fun with and has gotten slightly better since they printed Mass Commercialization. The card has three possible benefits:

1. It's an economy piece

Advancing cards is expensive, time consuming work. PAD Factory lets you ignore the expensive part (but not the time consuming part) by letting you put advancement tokens on cards for free. If your deck is interested in advancing a lot of cards (or one card a lot of times), PAD Factory can save you money.

I don't think this is really enough justification to play PAD Factory on its own. PAD Factory is two to rez, so it doesn't actually start making you money until you click it a few times. That's not terrible, but you could probably make more money if you had just played something like a Marilyn Campaign instead.

Taking off a bunch of turns to sprinkle do nothing advancement tokens on runner cards is a pretty good way to get out-tempo'd and lose a game of Netrunner. If taking off those turns lets you set yourself up economically for the rest of the game, it may be justifiable. It's certainly fun to click for 20 .

I love PAD Factory. Incidentally, I love Tennin Institute too, because it enables the same shenanigans than PAD Factory does. Unfortunately, even though they enable the same strategy, it's really hard to fit them in the same deck:

If you come up with a solid PAD Factory Tennin deck, hit me up because that sounds incredible.

(Crimson Dust era)
Sanjay 2971
the reason you take the weyland advancable ice is so that you have 4-6 things on the board you can advance if they run every turn and block your id ability. 2 pad factories would cost as much influence as 2 or 3 pieces of advancable ice and suddently every piece of ice in your deck is advanceable, that might be a nice way to free up influence for something else. — YankeeFlatline 6 Oct 2017
With enough setup this is absolutely hilarious with Red Planet Couriers too. Not sure how to jank it with Jinteki though. Terrify the runner with a 10 counter Kusanagi? "I hope you can break 13 net damage subroutines!" — cinnadream 19 Oct 2017
6

Compare the text here to, say, Builder, Shipment from Kaguya , Shipment from SanSan, and Trick of Light . Or perhaps Hollywood Renovation, or Firmware Updates.

Do you see something missing?

Barring an explicit ruling that that was an oversight in the card text and it works differently than that, I can see a real astonishing amount of fun coming out of this in silly ways.

(Business First era)
Sappo 26
Mushin No Shin, Tennin Institute and Dedication Ceremony already have such a wording. It is legal to put advancement counter on cards that cannot be advanced with them. — Lupus Yonderboi 18 Mar 2016
PAD Factory allows you to put an advancement token on an already rezzed (and well protected) Haas Arcology AI, threatening a FA agenda next turn. — tantale 18 Mar 2016
Can you put advancement tokens on a agenda which was put on glenn station? Because unlike the other cards this one doesn't say the card has to be installed. — GreyestWolf 23 Apr 2016
@GreyestWolf PAD Factory doesn't say installed card, but the current (as of the time of this comment) FAQ does: "Unless otherwise noted, a card ability that requires a player to choose a card can only choose installed cards." — stoppableforce 22 Jun 2016
It's not clear that card you place the advancement token has to be your card. Why not put advancement tokens on your opponent's Kati Jones. They'll be safe there until you draw Trick of Lignt. Or is this not supported by the rules. — nutritionalzero 5 Aug 2016