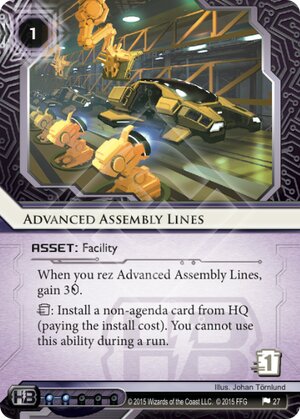 trash: Install a non-agenda card from HQ (paying the install cost). You cannot use this ability during a run.

One of the best things about this card is that it counters a first turn Temujin Contracts if you have at least one ice in your hand. The runner must pick a server to run when installing Temujin. Whichever central they pick, stop them before the run, rez your Assembly Lines, and ice the central they picked.

Advanced Assembly Lines holds a wealth of possibilities but is a bit dependent on the runner not running your remotes. With its low trash cost of 1 there is very little question that the runner will trash this card, unless you are Industrial Genomics: Growing Solutions and/or have some Hostile Infrastructure or Encryption Protocol installed. As an asset it will clog up one of your remote servers, so either you will need to protect it with Ice, or have a situation where the runner is reluctant to run your remotes (Gagarin Deep Space: Expanding the Horizon or Jinteki: Personal Evolution shell game).

It's important to note that Advanced Assembly lines has two seperate functions 1. Rezzing for 1 to gain 3, a net gain of 2. However this ability is not available to the corp if they have been Account Siphon/Lamprey/Vamped down to 0. 2. Installing any non-agenda card not during a run. This is similar to Executive Boot Camp or Tech Startup but far stronger because it can also be used for Upgrades or Ice and you do not need to reveal the card you installed. The disadvantage is that you can only install from what's in HQ and this ability cannot be used during a run, so if the runner runs on the server containing Advanced Assembly Lines, the opportunity is lost.

What can you do with Advanced Assembly Lines?

edit for Democracy and Dogma

So this card is starting to sound really amazing! What about the downsides?

Again 1 to trash is really cheap, so it will make your R&D more porous to multiple access.

If you have agendas in hand then using it to install could raise the chance of a successful HQ access.

Also if your opponent runs on the server where it is installed it just turns into 2 for a and a card. (Although it's worth factoring in the cost of a 'wasted' run for the runner).

You must have the relevant card to install in your hand.

Lastly it costs 2 influence outside of so you'll need to budget for it if you want it.

(Business First era)
Zakalwe 472
Hi ! I'm a new player so forgive me if I'm wrong. I think the best way to use it is with the identity HB ETF and to rezz it at the beginning of the runner turn : install a card gain one more buck and no fear that the card is trashed. — Manu l Humain 27 Mar 2016
I was siphoned down to broke as ETF. Install this, gained 1. Rezzed it, gain another 2. Blue Level Clearanced up to 6 creds and 6 cards. Installed a card to not trash down to hand size. Damn, it feels good to be a gangster. — PureFlight 30 Mar 2016
This card is fun vs. Leela. "Nope, that piece of Ice is going right back where it came from." — jdharper 8 Apr 2016
It should also be mentioned that this card is the asset equivalent of Lateral Growth, which might be a more viable alternative outside of decks like ETF or asset spam. — iBreatheBullets 23 Aug 2016
Fun with Surat City Grid and Brain Taping Warehouse. Install an ICE and rez it when the runner has 4 clicks... — Shulmey 19 Nov 2016
5

The most popular use of Advanced Assembly Lines is in Haas-Bioroid: Engineering the Future. This is due to its ability to install a card on the Runner's turn, before he/she takes any action. Doing so maximizes HB:EtF's ability (as Manu l Humain has pointed out in his comment).

AAL has a similar effect to Lateral Growth, with a few notable differences.

Early in the game, it is played like an operation with a net effect of "When your turn ends, gain 3 credits and install a non-agenda card." This is potentially 4 credits (from HB:EtF) if it was the only card you installed during your turn.

Once you've built your scoring server, you can also place AAL there and bait the Runner to check it. In that case, you gain 2 credits, the Runner spends a bunch of clicks/credits breaking ICE and trashes AAL. Otherwise, you can pop it at the end of the Runner's turn to install Political Assets.

Naturally, AALs will be sitting in archives as the game goes on. Team Sponsorship allows you to put your AALs back to work again (because AAL! AAAAL!).

Holy money Batman! End of the Runner's turn, I'm playing ETF with one of these bad boys installed in a scoring server with Breaker Bay Grid. One free credit, from install alone.

Rez for free, gain 3 credits, pop it to install Adonis in the same server, gain another free credit because reasons. Rez, turn begins, gain yet another 3. Watch as the runner tries to comprehend the fact you made 8+ credits by only spending one click.

(Business First era)
skyrunner36 95
Perfect Siphon recovery too as you gain the 1 cred it costs to rez by installing it. Destined to become a core ETF money card IMO. — lolpaca 5 Apr 2016
ETF has a lot of fun with this card. If you're worried about it getting trashed, you can rez it and install something with a higher trash cost at the start of the runner's turn for 3 credits total, turning every AAL into a 'Beanstalk Royalties' that says 'also, install a card while you're at it'. If you have a breaker bay grid out (and of course you have a breaker bay grid out, you're ETF), this is *zero cost hedge fund* that also lets you install a card. Absolutely nuts - just be prepared to put some major taxing on R&D, because that 1 credit trash cost means that, unlike an operation, this doesn't defend your precious agendas - and you're in danger of losing vital econ to multiaccess. — Acatalepsy 3 May 2016