The Corp has 1 additional bad publicity (even if they have 0).

"We may be outraged, but we're not surprised." -Sunder
Neutral • Micah Epstein • Business First 25
All sets:
Links: Decklists | ANCUR 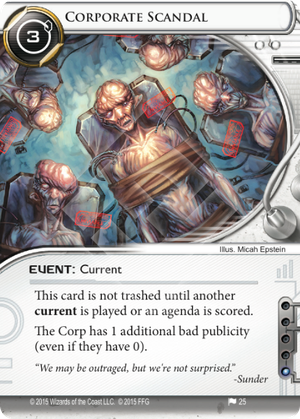 A lot of people aren't really liking this card, particularly with the one influence cost. As Zakalwe points out, if you're only making a run or two per turn, Net Celebrity pays off much faster. So what gives?

Bad publicity gives you a discount on every run you make. Increasing the amount of bad publicity you have means that you both save more per run, and runs are cheaper, letting you make more of them.

Consider this. The corp has a single Eli 1.0 protecting R&D, and you have a Corroder or Eater and a Keyhole. You just played a Day Job and have 10 credits and want to hammer R&D. How many times can you hit it before needing to click for credits?

Do you see what happens there? Going from 2 per run to 1 per run doubles the number of runs you can make.

This is where Corporate Scandal is strong--when you are just piling on bad publicity and walking through ICE like it isn't there. Obviously, this is strongest out of Valencia--she starts with one bad pub, which turns on Investigative Journalism, and then between Frame Job+Fan Site and Corporate Scandal you can get yourself to 3-4 bad publicity without much effort. More than that if they're running Hostile Takeover or illicit ice like Grim.

Of course, you need to have a way to make productive runs. Trashing assets is a good start: remember that you can use bad pub money during runs on unprotected servers to trash those Museums and Mumba Temples and Pālanā Agroplexes. Hitting HQ repeatedly with a Lamprey installed can be mean. Keyhole as I mentioned above. Or get something with instant-speed installs like Self-modifying Code, Clone Chip, Personal Workshop, or Savoir-faire and use bad pub during runs as your personal bankroll. Why not?

Really, the greatest downside to this card is that you can only play one current at a time, which means you have to choose between this and Itinerant Protesters. Which is better: having 3 bad pub and forcing the corp down to two cards in hand, or having 4 bad pub? Depends on the board state and the matchup, I guess.

The point is, don't knock it until you try it. Valencia has many more tricks up her sleeve than just Blackmail.

(Business First era)
tiedyedvortex 4551
I mean, there's a reason Desperado is so powerful it had to be put on the NAPD Most Wanted list. This triggers EVERY run, not just the successful ones, and only won't pay out if you didn't need to spend any credits on the run in the first place. — LordRandomness 28 Mar 2016
1

Corporate Scandal can be a great support card for Valencia Estevez: The Angel of Cayambe decks that rely on Blackmail. Given that Corporations have BP removal cards such as The All-Seeing I, Rex Campaign, Clone Retirement, Elizabeth Mills, Veterans Program, Witness Tampering or Exposé.

For decks that don't rely on Blackmail the closest comparison would be to the current Net Celebrity. Net Celebrity costs just 1 but it only works once per turn. Corporate Scandal on the other hand costs you 3 and works for every run you make. Both cost a to draw and a to play, so assuming 1 = 1 it takes 3 runs over 3 turns for Net Celebrity to pay for itself and it takes 5 runs for Corporate Scandal to pay for itself. Considering Corporate scandal is a 1 influence neutral card it does not seem to pay at all for Shaper decks.

Corporate Scandal can be very useful if you play Valencia or some other type of BP reliant deck, but not particularly helpful otherwise.

(Business First era)
Zakalwe 467
This thing exists to enable investigative journalism right? Now any deck can make bad pub happen? Blackmail leela? — gamblingworld 20 Mar 2016
Presumably, if All Seeing I is played against you when this is out, you can "remove a BP" to avoid losing your resources, and then the corp will still have 1 BP because of the current. This even if the corp has 0 BP to begin with. — michaeln 23 Mar 2016
Interesting thought. I'm going to guess that doesn't work because the corp still has 0 bad publicity when this is in play, its just when calculating the amount of bad pub for bad pub effects you +1 to that number. So you have 0 + 1 bad pub, but you still have 0 when it comes to giving anything away because you have 0 units of the bad publicity entity and you cant give away 1 of 0. I might be wrong. Lets see how the ruling goes ;) — gamblingworld 23 Mar 2016
My thoughts exactly, when reading the above post about how great this card is or rather how great bad publicity is, he kinda missed the actual point of the card: The corp has 1 additional bad publicity, as a "Current" effect. Which (now I am just getting back to ANR, but) it doesn’t say “Give the Corp 1 bad publicity” and even states “Even if they have 0” So no matter what with this out you can always black mail, and they can’t remove the effect, besides “current removal” i.e. scoring and agenda or playing another current… pretty NEAT! — rezwits 18 Dec 2016