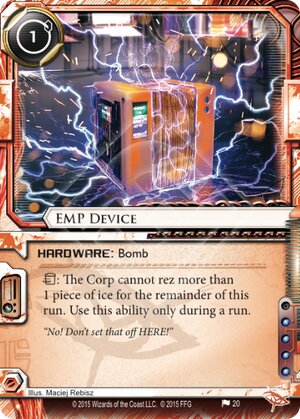 trash: The Corp cannot rez more than 1 piece of ice for the remainder of this run. Use this ability only during a run.

"No! Don't set that off HERE!"
Illustrated by Maciej Rebisz
Decklists with this card

For me this thing is a card 45; I don't know about you, but when I build a runner deck I like to include a tiny janky trick to help throw the opponent off balance and gain momentum. This card is that sort of trick. Not a game plan but a destabilizer.

Detonate it before you encounter the first ICE of a 4 deep glacier and well your Faust will probably take you through the one ice they are able to rez. Keep in mind they can rez 1 ice AFTER you blow this, so you need to pop it upfront to get maximum exposure.

If they only put 1 ice on a server like those Gagarin Deep Space: Expanding the Horizon kids well... this does nothing

What this card is doing mechanically is preventing the corp leveraging their assets. They can have 30 creds more than you, but say you have this and Film Critic around, there will be very few ways for the corp to leverage their 30 credit advantage to touch you while you can run on a wing and a Faust with only a fistful of creds around to detag if need be/pop that one ice you'll be facing.

I see 2 potential use cases:

1. Keep it hidden in hand, harass their centrals, let them think they have a scoring window behind their glacier, then pop the bomb down on click 1 detonate and run click 2, loling as your Faust gets you through the 1 ice of their glacier they are able to rez. Crescentus that 1 ice after breaking for bonus points.

2. Put it down early. Make them panic, keep their agendas in hand, or stuffed in archives- Hades Shard or Legwork for the win.

I think use case 1 is more likely to lead to your scoring. This card is an example of when the runner needs to keep their rig secret right up until the moment its used. Revealing this early may cause them to spread more thinly and be less blaze about installing agendas, which will decrease the usefulness of this bomb. (although to be fair that secrecy should go for every piece of your rig... The runner has as many secrets as the corp, its just harder to keep them...)

As of writing ( 30/03 in the year of our lord 2016) this card isn’t particularly relevant as net-runner’s meta is more horizontal than a limbo contest in a brothel.

No, right now my utility pick is not this card.

Still, its powerful, cheap and hardware. As its hardware they probably wont have an answer (hai Taurus!) It is great vs glacier... if only they hadn’t all melted...

(Business First era)
gamblingworld 75
"this card isn’t particularly relevant as net-runner’s meta is more horizontal than a limbo contest in a brothel." Just awesome. — archbishopdan 7 Apr 2016
Also, if they're playing Glacier, you have a Caprice and Ash to get through, as well... they can just rez things the next time you try to get through. Seems really hard to make this card work currently — tonedef 24 May 2016