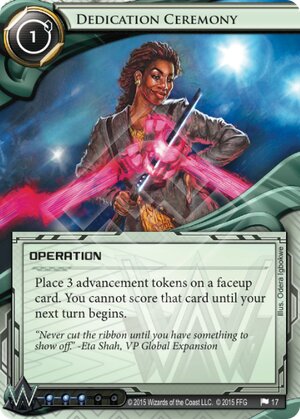 Place 3 advancement tokens on a faceup card. You cannot score that card until your next turn begins.

"Never cut the ribbon until you have something to show off." -Eta Shah, VP Global Expansion
Illustrated by Odera Igbokwe
Decklists with this card

Poor old Weyland only got a single card in this pack, and it's a real tough one to use effectively. I'm gonna comprehensively cover every card it interacts with, from the "meh" to the downright disgustingly good. "Faceup" means that ice and assets have to be rezzed, and agendas have to be Public, limiting the pool to Weyland's Renovations and agendas targeted by Casting Call. That leaves 3 types of cards that you can combine with Dedication Ceremony: Public Agendas, Advanceable Ice, and Advanceable Assets. Let's go through each of them in turn.

Despite the seeming focus of this card on it's interactions with the over-advanceable Public agendas, Dedication Ceremony does little to impress. Reminder: "placing" advancement counters is not the same as advancing, which means that the abilities do not fire when Dedication Ceremony is used. However, it does mean that the agenda gets to its advancement cost quicker, which means it can be overadvanced before it is scored. Let's assume the player spends as many clicks advancing as possible, and scores it the turn they can. That means two potential plays:

As a three card combo, however, and a fast advance strategy that requires an agenda already on the table (defeating the point of playing fast advance in the first place), I'm afraid I can't see this strategy appearing outside some janky decks. So let's move on. What about advanceable ice? Well, the closest comparison I can make is Patch, a card that already rarely sees play. For most ice, Dedication Ceremony is a credit more for a credit extra tax, which is not a terrible improvement, but it can't touch non-advanceable ice. I wouldn't recommend building a deck around it, but as a potential side-use of one of the other strategies it's not completely terrible.

But what about that final group. This list contains the assets that gain a benefit from a Dedication Ceremony, with a couple that don't work like Constellation Protocol. This is where we get into some pretty ridiculous jank territory, with some of it verging on being playable. Let's dive in to my favourites:

Gaining 12 is pretty astounding: it's a similar credit swing to the ol' Oversight AI/Curtain Wall combo in Blue Sun: Powering the Future, but without the risk of failure (note: with the exception of the upcoming Councilman, the runner cannot stop this). But the latter is ridiculous. 12 credit loss is like a corp-side Vamp, opening up scoring windows by sheer force. On top of that, runners tend to have control over their credit pool and never let themselves dip too low, which means they lack economy cards that can even be played at a couple of credits.

In Blue Sun: Powering the Future, the large ice you use guarantee a scoring window if not two, and the credit swing can put you back into SEA Source range. I like rezzing a Corporate Town at the beginning of my turn to trash a loaded Kati Jones, then they get to see their economy get ripped to shreds as they scramble up the 5 credits needed to trash it. Meanwhile, Spark Agency: Worldswide Reach can send the runner back to the early game before they escaped the advertisement trap and keep them there with City Surveillance. It's so good I'm putting it in the "Tier 1.5" category. Take it to a GNK and proceed to make some stories.

Moral of the story? Don't sleeve it up with your Renovations. Cut the ribbon with something that you really want to show off.

(Kala Ghoda era)
RubbishyUsername 438
Contract Killer is worth mentioning. It's similar to Ronin but it does 1 less damage, can hit connections, can be fired off in a single turn from non-rezzed (install first click, rez, Dedicate second click, activate third click), and is entirely in-faction for Weyland. — LordRandomness 3 Feb 2016
I think the interaction with Oaktown Renovation is both better and worse than you're positing. On the one hand, I think your numbers are slightly out - with straight advancement, Oaktown actually earns you 6 credits (4 advancemeents for 1 gain each, plus 1 for 2), whereas with Dedication Ceremony replacing one of the clicks means the first turn breaks even and the second turn is gain 6. So it's actually 6 vs 6 and Dedication Ceremony has given you a profit of absolutely 0! BUT - what it gives you is flexibility. If you install-advance-advance Oaktown, then next turn you have to spend at least two clicks advancing further, or else leave it on the board for another turn. With Install-Dedicate-Advance, you have a choice: you can score it instantly if you need clicks for something else (and scoring it cost/gained you a net 0), or you have a click-for-two-credit action available for you as many times as you can spare this turn. So Dedication does some work with Oaktown, but purely as flexibility, rather than as finance. — LeonardQuirm 4 Feb 2016
Careful. Though it's clear from the rest of the sentence, saying "you can score it instantly" might be misleading as you can't score it on the turn you dedicate it. "...immediately when your next turn begins" would have been less ambiguous. — Sabin76 5 Feb 2016
Given the ruling on Tennin, does Dedication Ceremony allow you to put advancement tokens on your ID? And runner cards? — ende23r 3 Mar 2016
6

Oh wow, what a lot has changed since 2016. Dedication Ceremony has gone from being jank, to the cornerstone of a number of different Weyland decks, and is one of the major reasons why Titan Transnational got banned.

The thing about a card like Dedication Ceremony is that as more cards are printed, it gets more cards to put counters on, and some of the more recently available synergies are really powerful.

First, the synergy that's been tearing up the tournament scene recently: Dedication Ceremony + Reconstruction Contract. We don't care about the trigger on Reconstruction Contract at all for this: we care about the trash ability. If you install Reconstruction Contract, rez it, and Dedication Ceremony on it, you get to place 3 advancement counters on anything for , , 2. So we saved a credit and a click over advancing the whatever-it-was normally. Although it requires two cards in hand, this is a lot more resilient than a typical fast-advance option because you can score out with almost no credits (e.g. spending your turn fast-advancing with Biotic Labor costs 7, and this is a whole 5 cheaper), so it's very hard to stop it using econ denial. Out of Titan, the combo made use of Project Atlas counters in order to ensure that the key pieces could be grabbed from deep in R&D (where they were fairly safe), meaning that the combo was also very hard to stop by trashing the pieces. So often you could be staring down a Titan deck and realise you actually had no counterplay in your deck other than trying to steal 7 points off R&D before the Atlastrain happened.

The other major competitive use of Dedication Ceremony is on City Works Project. In this case, the aim is normally to install your agenda and double-Dedication it on the same turn, creating a monstrosity that requires suffering 8 meat damage to steal. The plan with this is generally to leave the agenda sitting there and take advantage of synergies with having agendas installed; SSO Industries is the most obvious (and this combo has become more or less mandatory there), but more recently people have been experimenting with things like Neurospike (do you want to steal it and take 8, or leave it there and take 6 after discarding to hand size?). This sort of combo has also become standard in Jemison Astronautics decks, which can typically get away with a single Dedication because they usually have ways to forfeit an agenda and add extra counters out of nowhere. Although the City Works Project combo has technically been legal for a while, it was unplayable for most of that time due to Film Critic, and has only recently surged to prominence due to the Critic first being banned, and then rotating (Whistleblower has so many drawbacks and limitations that nobody runs it unless the metagame really forces them to, so there's basically no way to stop this short of ridiculously large levels of damage mitigation or tech cards like Because I Can).

There are some jankier uses. Some combo decks want a remote server that's impossible to survive a successful run on, and don't much care what's in it; you can rez an ambush there, and use Dedication Ceremony to advance your ambush out of the range where the Runner may consider running it intentionally to trash it. I've seen Dedication Ceremony + Clearinghouse played against me in glacier; if your deck can keep an agenda safe for a turn, it can probably also keep an asset safe for a turn, and (with a double Dedication) that one turn is enough to kill. It can trigger advanceable assets in one turn (except for Ronin); people used to use Contract Killer for this, and although that has now rotated, something similar can be done with Reversed Accounts (as the older review mentioned). I haven't spotted these combos at the top levels yet, but maybe something of this nature will end up being viable at some point; after all, ban lists change, and new cards are printed.

I expect Dedication Ceremony to only keep getting better over time, though. The numbers on this card are better than on pretty much any other fast-advance card, and the drawback is basically only a drawback when it comes to ICE and agendas, so this is going to be the card of choice for fast-advancing assets for a long time. (In fact, it wouldn't surprise me if it ends up getting banned eventually, to avoid having to limit the design space for what can safely be printed on an advanceable asset.)

Note that a single copy of this on a City Works Project is already a serious threat. Especially if backed up by Punitive Counterstrike. And since it's only two clicks you can either advance it again by hand or tutor the Dedication Ceremony with Consulting Visit or play any other card, like Hedge Fond or an ICE in front of the agenda.

I agree. I faced this situation the second time I played against that horrible Outfit deck (the first time I got killed by turn 2 because of "lucky" The Maker's Eye ), and it´s the strongest protection an agenda can have. Umm, so you wanna take 6 meat damage? Well, of course you can do it, but we really want to complete this project, so we will be very, very upset

Wait, has someone already noticed that the SU reprint of Punitive has card ID (31078) exactly by one thousand higher than City Works Project (21078)?

People's thought process with this card has been pretty one-dimensional.

Use it on the series of face-up agendas Weyland has and it's like a psuedo fast advance, yeah?

Casting Call something better out and then slap this on it. Use this on Woodcutter or Mumbad Construction Co.. There's a lot of potential for this card people are missing.

(Business First era)
An0n3 27
This Ronin is dedicated to that little twit who keeps trying to break into our servers. Hope you die! — LordRandomness 24 Mar 2016