subroutine For the remainder of this run, the Runner must pay 1credit as an additional cost each time he or she uses an icebreaker to break at least 1 subroutine.

subroutine For the remainder of this run, the Runner must pay 1credit as an additional cost each time he or she uses an icebreaker to break at least 1 subroutine. 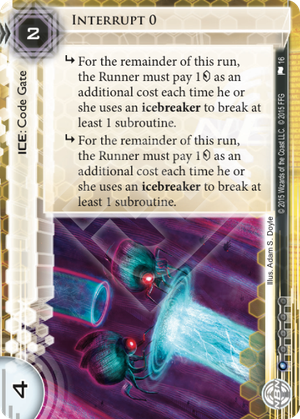 You want this card on the outside of a server with multiple pieces of ICE with multiple subroutines. Hive and Spiderweb would both love this card, as it would massively increase the cost to break them. Being only 1 pip also makes it Weyland splashable easily.

Rezzing for 2 and having 4 strength is also not a bad strength to rez ratio and isn't broken by Yog.0 which is nice.

However, isn't this often going to be either a midgame 4 strength ETR piece of ice with 2 subroutines or if the runner is rich a slight tax? It is going to be interesting but not a competitive piece of ICE I think,

(Kala Ghoda era)
LeaPlath 36
I mean, it's about as taxing as Eli 1.0 for credits, only it's a Code Gate and cheaper to rex (also one less influence now). The thing that really makes this card a difficult include is it's positional nature. Positional ice = potential dead draws and that's almost never worth running over say a typical Wall of Static or Enigma. It could be absolutely brutal, especially in a Midway Station Grid deck. But that stars have to align, and so it likely won't see much play. — WayneMcPain 3 Feb 2016
Using Shannon Sinclair + daily business show you can negate dead draws until they are useful again. — yourfriendmisery 21 Feb 2016
This card is also weak to e3 Feedback Implants, D4v1d, Cloud breakers/Deus X/Sharpshooter/Faerie. It may also have limited benefit if it is paired with Bioroid Ice or Trace Ice. — Zakalwe 24 Mar 2016
0

There is an irony to this card in the current meta.

The two most obvious choices to throw behind this card are Spiderweb & Hive. But I do not believe these are the best options. The fine print here is "...at least 1 subroutine." Meaning if the breaker being used can break more than a single sub with each pump, it might just be easier to let the subs fire and keep moving.

Popular examples of Breakers that can break more than one subroutine include Who Thought This Was a Good Idea, a weasel, a tank, and the Stealth AI. Most of these cards only pay an extra 2 credits to do their jobs, instead of [Number of Subs] x 2.

Compare that to the fact it costs about 4 credits for more popular decoders such as Gordian Blade, Abagnale, Inversificator... Refractor breaks for 2 + 1 Stealth, and you realise it's cheaper to just let it fire than to try and break it. So let's try and do something that will force the Runner to find an answer to it.

Now, as Paperclip is incredibly popular at the moment, is there any multi-sub ICE that AREN'T Barriers, that can have more than a few subroutines? There are a few options we have: Woodcutter, Komainu, Ireress, and Fairchild. Two of those are already amazing to begin with, but two of those are also lacklustre otherwise. In particular, I feel that Interrupt 0 would work very well with Ireress, as it not only offsets the free credits from your Bad Publicity, but forces the runner to pay on top of that. However, a 5-sub Komainu, or Fairchild, behind an Interrupt 0 would be a genuine pain to deal with.

But ICE isn't our only solution, Chief Slee forces the runner to respond, paying the money to break it, or suffer.

I'm sure there a number of other points I've missed, but those are the ones that have come up the most in my experience.

(Crimson Dust era)
Drakeheart 37
Fair warning, Woodcutter and Ireress have both rotated for competitive netrunner now. Another janky non-barrier piece of ice with the potential for a lot of subs is Tour Guide, though I have no idea what a deck that needs a lot of assets and stacked Ice would look like. — Oooer 8 Nov 2017