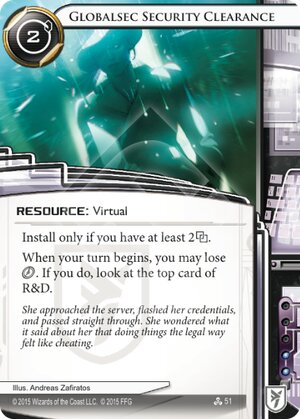 Install only if you have at least 2link.

When your turn begins, you may lose click. If you do, look at the top card of R&D.

She approached the server, flashed her credentials, and passed straight through. She wondered what it said about her that doing things the legal way felt like cheating.
Illustrated by Andreas Zafiratos
Links: Decklists | ANCUR

Yes this card wins me games, but does it win me enough games?

The win condition happens when I've built a Sunny Lebeau: Security Specialist deck for HQ accesses, when I've survived long enough to get 3 underworld contacts folding up 3 paper airplanes each turn giving me 6 creds a turn for doing nothing. I earn my 6 credits, I lose my click, I review the top card of R+D, if i want to trash it, or if its an agenda i go get it. If not I focus on making money, or cleaning up the board state (hunting down Jackson and Caprices) If the corp goes mad drawing up on their turn. Well that's when sunny gets off her Global Sec spinny office chairs and Legworks their HQ. If they install, well its Sunny, so I go waltz into the remote and take the agenda.

What this card is doing is allowing me an in faction R+D lock without even having to run. I lose a click. Which we may value at 1 credit. Heck that's a simplified analysis, and misleading, 1 click makes a bit more if you have an event heavy deck... but it will do for my next point-

The other card that gives me access to a repeating payed cost to see 1 not installed card is Bug which asks for 2 credits. Double the price! Stupid bug? Who uses that anyway?

Ok, let's move to a comparison cards for a class I'm gonna label as 'What's on the top of R+D you guys??' (bug gets left out as its not quite the same function.)

From memory we have 3 cards that fit that bill

Woman in the Red Dress - Cost 3 Inf 4 'Resource' 'Virtual' 'Connection, When the runner turn begins reveal the top card of R+D. Corp may draw that card

Well the first point is our friend Apex: Invasive Predator gets to use all of these cards in her/his/it/their nefarious scheming/instinctual rampaging. I dont really know enough about Apex to say whether we want to do that, but I could see it as a viable strategy, seeing as Apex has the strength to force themselves into just about anywhere so long as they dont do it too often. Which is what these cards are enabling- allowing you to make limited runs which each count.

Disadvantages Takes up 1 MU- I need to make 3* successful r+d runs to enable this, then assume the corp does not purge or Cyberdex Virus Suite. If they do I have to do that again. Of course running R+D isnt terrible. Its kind of what I want to do a lot of the time. -but that's a lot of running. If the corps smart this will costs you more than 1 cred each turn to sustain. What this is telling me is that Deep thought is only viable if you were planning to run R+D a lot anyway. Which, if you were, why even bother with the Deep Thought deckslot in the first place? Sure there are edge cases, like spotting a Snare! as the top card of R+D, but if you had a run R+D loads with R&D Interface/ Mediumplan you were hopefully ready to mitigate these dangers anyway, because that Snare! might just be 2 cards down the pile.

Conclusion. Deep Thought does not enable money saving R+D lock unlike the other two cards. Deep thought has no real use case.

Woman in the Red Dress

Advantages- Once its down, its active and there are no upkeep costs

Disadvantages- You must reveal the card- as in, show it to yourself and the capitalist patriarch/matriarch probably drinking across the table from you. Then they can draw it (disclaimer I know this isnt an objective disadvantage.)

Err(s)... there is no may clause. You will reveal that card each and every time after the woman is installed.

Conclusion So woman does create the same situation as GlobalSec Security clearance. It provides your R+D lock each turn without the need for other cards. It tells you when you need to run R+D and when you dont need to run R+D. The thing is... the corp knows if you need to run R+D and they have the option to make that a need to run HQ by drawing the card. So this card also fits into decks which are able to run HQ effectively, in fact it is more dependent on HQ attack because the corp will probably move agendas into HQ. The inability to turn this card off means you need to be prepared to run at all times. So you need to maintain an economic advantage over the corp Or they will basically be getting free draws off you. Which as Jackson has taught us is something the corp tends to like. People like Sunny and Iain Stirling: Retired Spook do well at this, I think Armand "Geist" Walker: Tech Lordlikes to save his breakers for key moments as well. Unfortunately the constraint of the shaper faction and an in cost of 4 makes taking woman a conscious choice, one probably supported by hostage.

Advantages - Always available (unlike deep thought) 'May' Clause (unlike woman) doesnt reveal/draw the card (unlike woman) I think this last point is a big deal because a run on r+d is certain to give you the card you saw whereas a run on HQ can be a 1/5 or 3/5 if you come prepared (which you should have if you were using any of these cards really.)

Disadvantages - requires 2 link (restricted to certain Ids then) costs a click each turn its used.

Conclusion- I think this is the best of the bunch. I would rather be making guaranteed runs on R+D than chancing HQ runs. I like that I dont have to make use of it if im not prepared to run anyway. Woman is a cool card, but when the tempo is against you it can start to betray you, GSC you can just switch off. I like that its more splash able. I like that it synergises with Sunny who it is in faction for

A note about Jackson Howard. Obviously Wacko Jacko should be hunted from the board, because if the corp sees you look at the card then run R+D they will Sham-JHow to R+D shuffle, negating the effect. In the event that Jackson is well defended but R+D inst you might launch a fake out run to trick them into thinking that R+D needs shuffling and wasting their Jackson.

Now after that little talk I go back to my initial question, does it win me enough games? Simple answer no. It lets me crush the glacier decks im already advantaged against, but against the quick decks... well I need every click right up until they win. I take this card in Sunny. I'd take this card in any deck that's about waiting for the right moment or controlling the board. Its a great piece of kit for controlling R+D. -but... its not helping out with the match-ups that these runner decks lose to. -Fast corps. Neither do the other 2 cards... I compared it to...