When your turn begins, take 2credit from Launch Campaign. 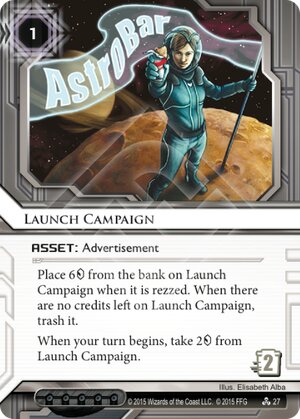 Another superb card for Spark Agency: Worldswide Reach decks, it pays for itself in terms of credit differential when rezzed during the runner's turn. The fact that it only costs one credit to rez makes it a prime target for Ad Blitz plays.

From the runner's perspective, they (usually) lose a credit via the ID when it rezzes, and then another two when it is trashed. If not trashed meanwhile, it eventually generates a further six credits for the corp. As such the runner may be inclined to trash it on sight.

However, this outcome is acceptable for the corp as it nets a two credit differential. Also, once Ad Blitz brings multiple copies back into play, the runner may lose their appetite to trash it again!

Finally, the card is suitable to fake out as an agenda, as the downside risk is not huge. This may be done in order to see the runner's reaction to a remote server install, or else to force them to run through a series of expensive ice to generate a credit advantage.

(Data and Destiny era)
Hayati 48
But how does it play in other decks? If I can't splash adonis campaign, is this a fair substitute? Or is it too short lived? — mmik 13 Jan 2016
It pairs well with other sources of econ, either asset or operation. I'm running 2x of these with 3 Melange and a whole bunch of operation econ in my Stronger Together deck with great success. — skyrunner36 8 Apr 2016