subroutine When the Runner encounters the next piece of ice during this run, that ice gains a second copy of each subroutine on it (after the original subroutine) for the remainder of the encounter.

//tl;dr duplicate the subs on the next piece of ice
NBN • Ed Mattinian • Data and Destiny 17
All sets:
Links: Decklists | ANCUR 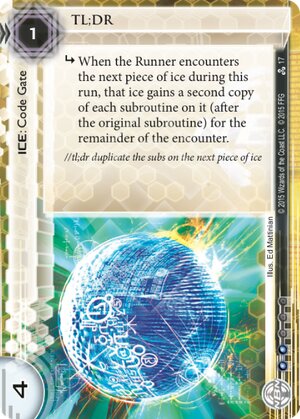 TL;DR is a card that lets you essentially double the subroutines on a piece of ice. It's kind of like getting two hamburger patties on your burger. Like if you wanted to go to Burger King or something and asked "Hey can I have a hamburger from you guys but with an extra patty on it?" and they said "OK." So you pay and wait for a little while. You wait, and wait, for what seems like an eternity. It must take a very long time to prepare another patty. After a while you get impatient and go up to the counter. The guy at the counter says "Hello, welcome to Jack in the Box may I take your order?" and you tell him "I already ordered. I ordered a hamburger with an extra patty on it." and he says "No you didn't." so you order again and pay again. See what I mean? It's like TL;DR making the runner do stuff again that they already did, and costing them more money.

An Encounter with the Teal Deer

Once upon a time, there was a happy little Runner, skipping through the deep dark forest of Jank. The sun grew low in the sky, and the shadows grew long, and the Runner thought it was about time to go home. But where was home? The black trees about them grew darker with every passing moment, and the labyrinthine woods stood threateningly..

Just then, a glittering light came flashing through the trees! A piece of ICE - the first in an four-tall glacier. Still, the Runner was not afraid. Their hand was full up, and Jinteki ICE was porous. They were not rich, but their Mimic gave them hope, and their Stimhack gave them - cash and hope that they might avoid that net damage. False hope, as it were.

The first ICE was a glittering yellow code gate, a duplicator of subs - an iridescent teal deer, drinking from a babbling brook that then split in two. Now, our dear Runner didn't have a Decoder on hand, but they decided to press on anyway. They were up at 5 points and they were sure that the twice-advanced server held the last agenda.

The second ICE was another teal deer, feet in one brook, drinking from another. Again, the flowing water split - this time into four. Now our Runner was well-versed in the math of exponentiation, and they knew what this would mean. But still, they pushed on. How bad could it be? Do or die - do or die.

The third ICE was another teal deer. The brooks split into eight this time. Now the Runner was terrified, and turned to go, but the path had disappeared. The labyrinth held them tight.

The last ICE was Komainu.

The brooks ran red with blood.

(Fear the Masses era)
Agenarchi 76
If I understand the rules correctly, the three TL;DR would have had no effect on Komainu, as the effect on that card is not a subroutine. http://ancur.wikia.com/wiki/Subroutine — PortlyAssassin 15 Jul 2016
Komainu gains subroutines "on encounter" and TL;DR duplicates subroutines "on encounter". Therefore, the Corp can choose for Komainu to gain the subroutines first and then let the TL;DR effect take place. — manicmoleman 8 Sep 2016
it should actually be 80 net damage subs, the last tl;dr has four subs, 2^4=16 — Swan 15 Jul 2017
Needs a Cell Portal after the third TL;DR and 3x Marcus Batty in the server, rezzing and firing each on the portal in step 2.3 before the runner actually encounters it to make the runner hit 9 more TL;DRs. 2560 net damage subs on Komainu. — CelestialSpark 19 Feb 2018
Actually, my mistake. Each of the 12 encountered TL;DRs wuld have 2^(n-1) subs, so the final has 2024 subs. The ICE after thus has 2^2024 additional copies of each sub, or roughly 12 googol. Then Faerie breaks your Komainu for 0 credits anyway and your opponent slaps you for memeing to hard. — CelestialSpark 19 Feb 2018
Sometimes I just can't math. The ICE after a TL;DR string has 2^n copies of each sub, where n is the number of TL;DRs. So just 4096 there. Add three Wormholes before the portal to get 16,777,216 though. — CelestialSpark 19 Feb 2018
This is probably my favorite comment on the site and this math makes it even better. — Cpt_nice 27 Mar 2018
Actually with 3 tl;dr it should be 1—2—4x duplicate, resulting in 16x5 = 80 net dmg. — Vortilion 27 Mar 2018
I think that the way it's so cautiously worded, no matter how many TL,DR you chain, the next ICE would only gain a "second copy" of each original subroutine. — zosete 10 Oct 2018

@zosete the key here is that is does not say "each printed subroutine", and also that the subroutines fire in sequence and not simultaneously. So each time TL;DR creates a duplicate of a subroutine and then fires again, it also duplicates the duplicate.

TL;DR is a fantastic piece of ICE in concept with a great deal of beautiful combinations. When this was first revealed it was a lot of fun trying to think of how it affected existing ICE, even turning Komainu into a true flatliner. Alas, the problem with TL;DR is that it suffers from exactly the same problems Chum has - It's a Prefix ICE, it can't do anything without a relevant target innermost to it, and any sensible Runner will not continue the run if they were forced to let it fire. Just bare in mind that there is a very, very slim chance you will ever see it work its magic; however, Prefix ICE tend to be the kind you can't afford to let fire, especially TL;DR.

Could you deal with a Hive with 10 ETR subroutines?
How about Information Overload with double the subs worth in tags just after a Midseason Replacements? With Faust becoming very popular, Corps are turning to multi-sub ICE in a bid to slow it down, and TL;DR is a real pain in the neck if left unbroken. Compare the strength to rez ration, and in a multi-sub glacier deck you could do a lot worse!

(Data and Destiny era)
Mechanoise 1570
I feel like you sort of buried the lead here. You mention that TLDR is not going to do anything, but you surround it with a bunch of talk about how cool it would be if it worked. Well and good, but, of course, it won't. In order for things to work out for TLDR it needs to be in a situation that basically doesn't come up. Most of the time slotting a quandary is a better decision for your deck. — Waltzard 2 Nov 2015
@Waltzard. When you think of TLDR you think of how awesome it would be to see the Runner hit a 10 sub Komainu on a full grip, and I make a point that it won't ever happen; however, this ICE can be good for forcing the Runner to deal with it to prevent those situations from happening. Of course it won't fire, because as a Runner you can't afford to let it fire, and considering it's a 1/4 Code Gate in the right situation it can tax, and doesn't immediately die to Parasite, and is useless against Yog. Apologies for confusion, just wanted to make a point that although you won't see the double-subbing in action you can use that threat to force the Runner's hand in breaking it, (Ala my last paragraph) — Mechanoise 2 Nov 2015
Sorry to criticize. I guess I sort jumped the gun on reading "TL;DR is a fantastic piece of ICE". I see where you pointed out the positional and situation dependent nature of TLDR after that. — Waltzard 2 Nov 2015
@Waltzard - "a fantastic piece of ICE in ''concept''" ;) and don't apologise for criticism my friend, nothing wrong with it. Just because it all sounded good in my head doesn't mean it does in everyone else's :). I hope I've clarified it up. — Mechanoise 2 Nov 2015
TL;DR: It's a great soft ETR ICE for the price! Will punish the foolhardy runner severely. — Sabin76 2 Nov 2015
If we're taking for granted that a runner will jack out after checking it and seeing they can't break, then isn't it effectively a 1-credit for 4-Str ETR? Is that not worth something just to score an agenda behind this and a Pop-Up Window early game and laugh for the rest of the game? — Damien Stark 17 Feb 2016
2

TL;DR - The taxation chum wished it could be...

Long ago, a little piece of ice named Chum, drifted through a server, connecting itself to whoever it could find. Chum was a lonely ice, but one that brought a sense of strength to those it met. In addition, chum had a dark side, a hidden side, to its persona - those that it attached to had to admire, or at least endure, Chum's possessive nature - who knew a little piece of ice could do so much damage?

But yet, as the months rolled on, little chum got a reputation, he was a target - and the bullies found a way to solve little Chum, once and for all. As before, little chum would cause the bullies to back off, but now the bullies came back the following night, bigger and stronger, and instead of getting their revenge on little Chum, they instead would take out the poor piece of ice forced to be Chum's friend - Chum's chum, if you will.

And so Chum was lonely again.

Now there was a new kid on the block, a shiny kid, a kid that did away with the lengthy discussions of sharks; replacing them with a cool new look and a cool new sound. All the ice wanted to be friends with TL;DR, because TL;DR appreciated them for what they were good at, and helped them to be better. And if the bullies came back, well, they had to break TL;DR first...

(Data and Destiny era)
jpsaxby 34
I can't determine if An Offer You Can't Refuse would work as a combo card. Labyrinthine Servers would work, as would Port Anson Grid... the latter probably the best because of the surprise factor. — fetish 13 Dec 2015