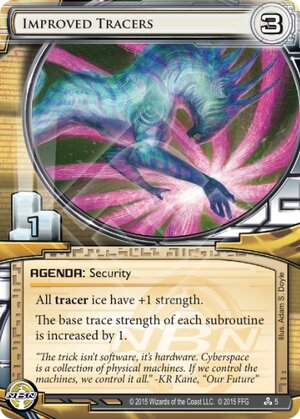 All tracer ice have +1 strength.

The base trace strength of each subroutine is increased by 1.

"The trick isn't software, it's hardware. Cyberspace is a collection of physical machines. If we control the machines, we control it all." -KR Kane, "Our Future"
Illustrated by Adam S. Doyle
Decklists with this card

First, let's talk basics: It's a NBN 3/1 agenda with an effect that boosts your defences in the long run. Which is bad for several reasons.

First, it's a 3/1 agenda. 3/1s are uncomfortably to score and don't really give that much points towards a victory. NBN decks may include up to 4 2/1s which are easier to fast advance and 6 3/2s which give you double the points for the same effort as a 3/1. Half of NBNs 3/2s even give you a fast advace tool at hand! (I'm assuming everyone knows the core set agenda AstroScript Pilot Program and how it helps at scoring agendas, especially ones with an advancement requirement of 3.)

So what does it give you? You don't get an instant money refund like from Superior Cyberwalls or Encrypted Portals, which is okay, I guess, because you get something else instead: A boost to base trace strength. But there are some problems with that, too, I'll talk about later. First, as it doesn't give you instant money it's a hefty invstment. Advancing this normally costs a card, 4 and 3, which sets you back in early game. But in order to make use of it you want to score it out early! A defense Boost is great for glacier archetypes, which are slow already and this kind of boost makes them even slower. So in the end, you are just slowing down your buildup to a point were everyone with a full rig doesn't care about your defences anyways, because they had enough time to set up as well.

Improved Tracers boosts trace strength, which is great! But sadly, it doesn't boost all your traces. Not even all traces during a run. No, not even all traces started by your ICE. TMI and Troll are sad. I know, they're not technically Tracers, but they could have used the boost.
So the problem is, the effect of this agenda is relying on ICE subroutines successfully firing. As soon as the runner is properly prepared that's only going to happen under his conditions. And the only time whenhe is unprepared is the early game. Agains, slow moving glaciers are sad here.
No synergy with Bernice Mai, Ash 2X3ZB9CY or Manhunt here as well, but I guess that's good. The agenda could easily be overpowered if it worked on non-ICE as well.

So how can we make proper use of Improved Tracers? I guess there's a pretty narrow room for fast, but defensive, NBN tagstorm decks that try to Fast Track this out and score it early behind a cheap ETR like Caduceus or Viper. Well, I'm not really sold on that idea, but I'm looking forward to someone building a competitive deck utilising Improved Tracers that does not become better when you score out a 3/2 instead.

I'm not writing all of this as pure theorycrafting. I have actually tested the agenda in my deck All Traces, No Tags. And it's a fun deck! I really enjoy it. It's crappy and looses all the time but it's fun to play! And I managed to actually score out Improved Tracers with it several times. One game I even had a Rutherford Grid installed in R&D, HQ and the scoring remote with 2 Improved Tracers scored. It was ridiculous. Trace strengthes of all subroutines were increased by 4, making it absurdly taxing to beat any trace. Well, I still lost that game, but it made for a great WTF moment when the runner was looking at Viper with it's 3 rez cost, 6 strength and two 7-strength-traces.

This brings me to my personal conclusion... The ICE I really want to use this with are Viper, Caduceus, Taurus and Sagittarius, which all are Weyland or HB.
My personal greatest problem with this agenda: It should be neutral!
Every faction has Tracers and uses traces, but for my personal taste there are two factions I really want to use Improved Tracers with: Weyland and HB!
Weyland was always the glacier faction and has some crappy advanceble ICE that could really use this boost along with some great tracers that could be even greater with this agenda. I so want to build this deck!
Haas-Bioroid on the other hand has a lot of bioroid ICE that already are taxing because of their high strength and would be extremly strong with even more strength: Viktor 2.0, Ichi 1.0, Ichi 2.0, Sherlock 1.0. All these bioroids have a low base trace strength which could make great use of Improved Tracers! Add Viper as cheap early game ETR and Sagittarius just because it's a cool ICE and you've got some nasty defences for a slow ETF campaign-driven glacier. Plus, If anyone can easily score out a 3/1 it's the faction with the most possibilities to accuire a 4th ! I really really want to build this deck!

(Data and Destiny era)
Krams 938
I think your review is spot on. I've tried building a Tracer Glacier using Improved Tracers and I've tried it in about half of the NBN identities (Making News and NEH are strongest btw). The results are quite lacklustre because it's too slow to set up. The only thing I want to add is that Muckraker and Shinobi are interesting pieces of ICE to use with this type of deck. — Zakalwe 18 May 2016
3

Can't believe none of you guys mentioned Assassin as a card it effects, which already has great traces and decent strength

(Data and Destiny era)
MattOhNo 9
I think this interaction is only marginally good, if at all. Either the runner has no solution against Assassin, then it's great on its own, or the Runner use Faerie/Sharpshooter/Deus X/D4v1d, and it won't help at all. BTW, it's a thought about these 2 cards together, not about each one by themselves. — Lupus Yonderboi 30 Oct 2015
2

This is a similar agenda to encrypted portals and superior cyberwalls, as close as it should be really, no one wants a strength 4 architect, making it say tracers and not sentry is a good thing. Not giving money doesn't seem quite right. If you look at the tracers in the game, you'll notice that about every single one of them has a steep price some way or another. Troll doesn't cost much, but it doesnt do much, unless your breaking news, and even then not much, and nothing with this agenda. Flare costs 9, Draco is either cheap and worthless later, or expensive, and a small tax to a linked runner, or while being wielded by a Corp that doesn't want to vamp itself. Viper is reasonable, but it's in HB, and costs influence in NBN, snoop costs 6, data hound barely does anything. TMI is impossible and poorly designed. Caduceus is about the only case for not letting this agenda make you money, but hardly, and it costs 2 influence anyway.

No one likes playing 3/1 agendas, especially not NBN, which has 4 2/1 agendas, so why not let this agenda be a little stronger? It's never going to be competitive until they allow a Corp to substitute a few 2 pointers for 1 pointers, deck slot wise, and even then, it doesn't do that much to a runner with high link, or a way to deal with these ice that isn't Atman. I'm all for the portals deck, and I occasionally get lucky with cyberwalls, but I think Rutherford Grid is a better idea for making traces stronger, since it's not an agenda, and has a place in tag storm decks. Making news with manhunt on a Rutherford Grid server, or casting call haarpsichord dickery involving kitsune, shinobi, a successful run with a Marcus batty surprise trigger, and a few dwarves listening to the cars on cassette tapes while dancing on pool tables all feel way classier than this.

That being said, I do enjoy making my sentry ice and Mother Goddess stronger anyway I can, so if I ever play a draft game with this and the other, similar agendas, this gets a glowing review for being ultra boss.

(Data and Destiny era)
cmcadvanced 25
I think you're underestimating this card. First, I'll note this does nothing for Troll or TMI (neither are tracers, and neither have trace subroutines). There are some real powerful tracers in the game, and a deck built with more than maybe 4 of them gains a lot from using this. As you mention, Viper becomes a 3 cost strength 5 ETR ice, which is very strong indeed. Data Raven is strength 5 and still hands out tags, and Gutenburg stops being mimic bait if it's off RnD. Also note this boosts Archangel up to being a truly ridiculous 4 cost, str 7, trace 7 bit of ice that the runner can even hit inside RnD or HQ. Resistor is actually a nice little bit of ice also coming in DnD, and at 0 to rez and 0 strength feels... okay, I guess. Giving it a strength and trace boost and it's the NBN ice wall, and now immune to being insta-parasited. And that's ALL not counting the fact the effect of this stacks; manage to score two or, heaven forbid, three, and your nasty trace ice is looking very nasty indeed. Data Ravens rezzing for 4 and ending up strength 7 with trace 6, Shinobi strength 8 and 3 evil traces on it (ending the run, too). Even just Vipers and Caduceus become very powerful. I realise this is all on the awkward 3/1s, but you're in faction with SanSan which can turn it into a 2/1 if needs be, I imagine worth it to create some truly taxing ice. — unitled 30 Oct 2015