When your turn begins, gain 1credit if there is a rezzed asset installed in this server.

The expo was built in the East California desert: a temporary city constructed for the advancement of humanity.
Weyland Consortium • Maciej Rebisz • The Universe of Tomorrow 119
All sets:
Links: Decklists | ANCUR 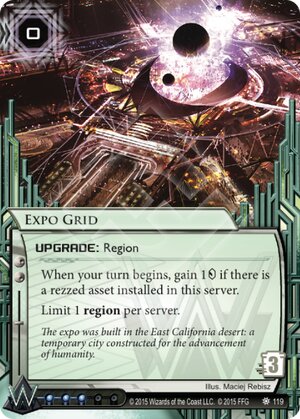 At first glance, this card is a solid addition to asset-heavy identities like Gagarin Deep Space and Industrial Genomics. It's essentially a PAD Campaign turned on by the presence of a rezzed asset. Any deck that loves assets will generally love this card - but in looking at what assets to pair with this, we might find a surprising depth of choice.

Take the aforementioned PAD Campaign, for example. Like many assets, it tends to sit out in a remote all on its own, gradually building revenue for the corporation. There's not much harm in putting an Expo Grid alongside this - chances are you weren't going to put any other upgrade in that server in the first place. The end result is a remote earning you 2c/turn for a 2c + 2 card investment - which isn't bad, considering the relative rarity of cards like Singularity, and that Imp will only solve half the runner's trashing conundrum on its own.

Other assets that aren't straight drip economy gain added impetus when run beside the grid. Jackson Howard is one such card. He's a trash-on-sight for many runners in several matchups, where they end up fearing recursion of cards like Caprice Nisei, or his added draw speeding an Astrotrain. This fear is relaxed somewhat against Weyland IDs - especially in the early game, where the runner is too busy setting up their rig to care. Add in having to navigate Gagarin's Paywall Implementation and ability tax just to touch him, and their reluctance is understandable. This apathy has a bit more sting to it, though, when the Expo Grid is making him pull double duty as a PAD Campaign.

This works for more niche cards, too. Maybe Elizabeth Mills just finished handling the fallout from your recent Hostile Takeover and wants something to do before burning down the runner's house later in the evening. Same for Mark Yale, or an Executive Boot Camp in recess: instead of wasting away in a remote after serving their purpose, they can staff the grid and earn some sweet company dollar.

Better yet, consider more high-priority assets, like an Adonis Campaign, potentially backed by one or more Hostile Infrastructures, which in turn may be buffered by a dense series of Encryption Protocols. You can pin any of these to your Expo Grid - but all of them will hurt to trash. Any targeted snipe to disable the grid itself will feel like a minor victory, at best.

Since you're required to access all cards in a remote, this works for traps, too, which can get downright comical. An Expo Grid alongside an exposed Snare! is basically an exploding PAD. Does the runner feel like zapping themselves to trash it? If that rezzed Snare! is powering up a line of Tour Guides over R&D, maybe. A triple advanced Junebug, in comparison, is a pretty ironclad deal - one that serves as an explosive GRNDL Refinery if you liquidate it via company Back Channels. This combo will probably win you more weird looks than it will games, but the concept illustrates Expo Grid's flexibility fairly well - something that will only improve as more potentially-threatening assets are released down the line.

(The Universe of Tomorrow era)
Paricia 15
I love this card, but the pros and cons is that it belongs in Gagarin. For an extra 1 credit drip you will not be splashing 3 influence per Expo Grid outside of Weyland. The Pros is that the Runner must spend an extra credit to access the upgrade, the cons being the Runner can decline to pay the credit to access the nasty trap in the same server. — Mechanoise 18 Sep 2015
With the PAD Campaign example, why not just run another PAD Campaign instead of this? It will cost the runner an extra click to trash both, and PAD campaign is more expensive to trash. I just don't see a reason to play this card at all in Gagarin :(. I like the snare idea though! — weepinggorilla 19 Sep 2015
@weepinggorilla — Mechanoise 22 Sep 2015
@Weepinggorilla - For one reason it's 1 less to rez. In Gagarin I wouldn't run this without 3 PADs anyway. With all 3 Pads and Expos out you're generating 6 credits, and while Pad campaigns are a pain enough to trash you have the space tax for access on top of that with Gagarin. — Mechanoise 22 Sep 2015
7

You must be really tired of this horrible man Whizzard waltzing in and tearing down all your moneymaker assets. I might just have the solution for it.

Let's say you failed a trap. Dropped a Snare! on board, or a Junebug, Overwriter, Secretary, you name it. The runner didn't bite, because sheesh, who you're trying to trick?

Don't lose your spirit! Now it is the time to convert your failure into success! Just follow this simple step-by-step guide I have prepared for you:

Step one: admit to your defeat. Rez your failed trap.

Step one A: ignore the puzzled, condescending stare from the other side of the board.

Step one B: seriously, ignore it.

Step two: install this on your trap-server, then rez.

Step four: move mountains with the sheer size of your manhood.

Now the real fun begins. Are they really willing to walk right into a trap they despised earlier just to mess with your economy engine?

(Fear the Masses era)
H0tl1ne 374
Throw in Shell Corporation for maximum money making. — stringtheory 5 Jul 2016
Oooh, nice shot! — H0tl1ne 5 Jul 2016
Really nice idea. Moving it one 'row' back makes all the difference. Also helps me because I swear every time I put down a Snare something is holding a neon sign above my head telling them exactly what it is. — Tirranek 21 Jul 2016
Ah, neon signs. Did you know they give them away free with each Core Set? Neato, but how I get these off? — H0tl1ne 29 Jul 2016
0

From a Red Sands cycle perspective Expo Grid has a useful property compared to just smashing down another Pad Campaign: you can do with less remotes. This is useful because of Aeneas Informant and Security Testing (and to a lesser extent Temüjin Contract). A trivial piece of ice that costs 2 to break makes the server uninteresting for money gaining purposes.

The benefit is a bit too small to justify the ••• influence cost but in Weyland it's interesting.

(Free Mars era)
Silv 303
In order to counter such things as SecTest and Temü, you'd have to go with 0 unprotected servers. So to use Expo you'd need a protected server with a rezzed asset that stays. Now, you could stack it with a PAD Campaign behind a Wall Of Static. Simple enough. But that would still be a net gain for the runner to tackle with 3 Aeneas installed, so it doesn't fix the problem completely. And it would still be worth it to trash the PAD, because the Corp would loose 2c drip income instead of just 1c. So you'd need to protect it better, but that only makes sense if you get a lot of value out of it (more than you spend on defending it). And since this little bugger doesn't stack with itself that's not going to happen. 1c drip per turn isn't going to be much, especially when disrupted by trashing the asset every once in a while. Don't get me weonrg, 3 of those stacked would be awesome. But as it is, it only makes sense when you go horizontally, want drip eco and protect all your servers. Well protected asset spam? Hmm, yea, could be done in Gagarin, but seems odd, really. — Krams 7 Aug 2017