Whenever you make a successful run, place 1 power counter on DaVinci.

trash: Install a card from your grip with an install cost equal to or less than the number of power counters on DaVinci, ignoring the install cost.

"Our life is made by the death of others." -Leonardo Da Vinci
Shaper • Alexandr Elichev • The Universe of Tomorrow 107
All sets:
Links: Decklists | ANCUR 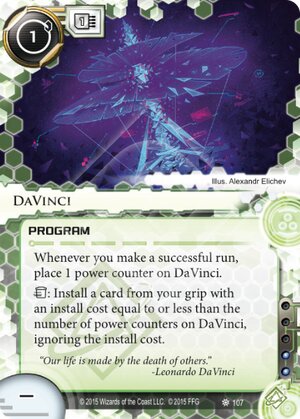 DaVinci is what happens when a Shaper tries to run like a Criminal.

Well...sort of. There are a lot of differences that make DaVinci a unique animal.

First, DaVinci is not permanent. Desperado makes you a credit a run, forever. DaVinci stops adding value either after you use it, or when you start earning power counters you're never going to use. If you use DaVinci to install a Liberated Account, then every run after the sixth gave you no additional value. The upper limit of value you can get from DaVinci is the most expensive installable card in your deck.

Second, DaVinci is not unique, or a console. You can easily have several DaVincis working at once, earning you several "credits" every run, and can still have a console alongside it. You could even be running two DaVincis and a Desperado at the same time. In fact, you probably should.

Third, DaVinci doesn't give you liquid credits. With Desperado, the credits you get from your early runs can be spent on your later runs. DaVinci gives you nothing until it pays out, and you can't go half-and-half with it; you must have the full install cost in power counters. It could be really frustrating to have 5 credits and 5 power counters, and still be unable to install the Garrote you really need.

Fourth, DaVinci gives you an instant-speed install. This is valuable on its own. You can run R&D with three counters on a DaVinci, and both a Medium and a Mimic in hand, dropping the killer if you need it and the Medium if you only see code gates and barriers. It also allows you to activate Hayley on the corp's turn. It improves the overall economy of the card, since the click you used to install DaVinci is the same click you would have used to install the other card.

DaVinci works best in an ID and a deck built for speed and stacking up "successful run" triggers. It would make a fine addition to the "Andy-sucker-rado-testing" build, but you could also make it work out of an aggressive anarch like Reina or Quetzal, or Kate in-faction, although I'm not sure if Kate's discount applies when using DaVinci. Feel free to experiment--it is a trash effect, which Geist likes, and it lets you install cards from 0 credits, which Nasir greatly enjoys. Just keep it out of Iain, and you'll probably do fine.

This card. This card is already one of my favorites.

DaVinci not only saves you a few credits, but it also lets you throw out both hardware and resources at really fun times, instead of just programs like Clone Chip and SMC.

I've picked out a list of cards that have interesting/fun/hilarious interactions with DaVinci, specifically its ability to install most any card with only a paid ability window.

This could very easily become one of the cards the corp hates to see lying around charged up, even if only because they have no idea what you're going to do with it. It's a shame you have to go through so much trouble to get it ready, but I still don't feel like that should hold it back too much.

I've been running Davinci in a Armand "Geist" Walker: Tech Lord deck and it is perfect in there!

Since you can only install cards less than the power counter's on it, you need low cost install cards, like the Forger, Clone Chip, Faerie, Shiv, Spike, and Crowbar. The instant speed install from the grip lets you run super aggressive early on, and a single counter on it gives a tonne of options plus the icing on the cake card draw. It's super fun to let someone play SEA Source and then bring out a Forger to clear it and get two draws out of it.

Once I needed a faerie but didn't have it. I used it to install a clone chip, draw a card but not the faerie, use the clone chip to re-install davinci and finally draw the faerie, and then use the davinci again to install faerie drawing a 3rd card and not being killed by a sentry

I have three things to say about this card: Utopia Shard, Eden Shard, Hades Shard.

You can play and pop Hades in the same paid ability window when the corp has overdrawn with Jackson. You can drop and pop Eden Shard to auto-win against any Power Shutdown combo. You can install Utopia Shard after the corp goes all in on a SEA Source or Midseasons, disrupting the Scorched kill.

(The Universe of Tomorrow era)
daytodave 1185
You could even store the shards/clot/whatever on bookmarks so they don't clog your hand. — TheBytemaster 16 Sep 2015
Corp has priority in its own turn, so it can pop Jackson before DaVinci installs Hades in window 2.2 — Greasythumb 17 Sep 2015
@Greasythumb That's good for us: If we have a charged DaVinci we can threaten Hades Shard, forcing the corp to Jackson immediately every time they discard agendas, whether or not the Shard is even in our deck. We can also do it after a Keyhole run, before the corp knows that an agenda was trashed. — daytodave 17 Sep 2015
2

It would be awesome though, if it did work - with enough Sacrificial Constructs and/or recursion, you could repeatedly pay out the stored credits on DaVinci. It would be an awesome level of jank, especially since as mentioned before DaVinci allows you to install any type of card - programs, resources, or hardware.

(The Universe of Tomorrow era)
Runaway 67