Choose a card installed in a server. Gain 3credit for each advancement token on that card, then trash it.

Sometimes corps have to bury projects, but that doesn't mean they can't make a profit on them.
Weyland Consortium • Smirtouille • Old Hollywood 99
All sets:
Links: Decklists | ANCUR 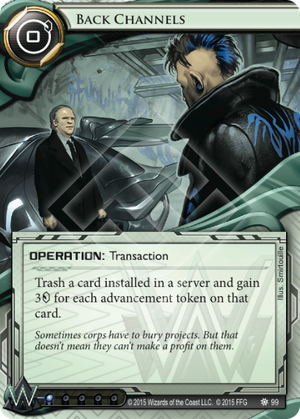 It's a bit curious that Back Channels is in a faction which has exactly two advancable assets (Contract Killer and GRNDL Refinery) which don't even work well with Back Channels. Though I guess I see why it's in , the mechanic of trashing your own cards for money is a Weyland thing (Liquidation, Reuse, Security Subcontract).

Back Channels ultimately functions best as a hedge against failed traps. Normally a failed trap stays on the board until you replace it, usually because you need the server. With Back Channels you at least get some money back.

An obvious combo is to use the easily splashable Back Channels (1 influence) in Jinteki with Mushin No Shin and a Project Junebug. Generally speaking a runner will be very wary of a Junebug at 3 since it deals 6 damage. So the runner may just be inclined to leave that card hoping it's a trap and not a Ronin. Normally a strong indication of Ronin is a fourth advancement token. When the runner knows you have Back Channels that indication is less strong however. A Mushin plus an extra advancement token makes Back Channels give you 12. That's a viable strategy. A Junebug at 4 is a whopping 8 net damage, also a viable strategy. And a Ronin is a viable strategy.

Since there are now three obvious strategies you could use, two of which would be bad for the runner to leave on the table the runner may be inclined to draw up to 8 and run. For a true Ronin that's the worst case scenario. For a Junebug at 4 it's not a bad scenario, sure you lose the potential of 12 but the runner would lose a lot of tempo in springing that trap.

Jinteki is about strategic ambiguity, about having cards on the table that could have multiple roles. Back Channels adds meaning, which is a very good thing.

NBN also has a bunch of advancable assets. A neat combo is to use Ghost Branch, slowly advanced by Early Premiere. It costs you 1 per turn but you can eventually cash it for 3 times the amount you've put on it. If you do this in NBN: Controlling the Message interfering with that plan would be expensive for the runner, 2 and a trace 4 for a tag if trashing the Early Premiere, a bunch of tags if trashing the Ghost Branch. Plan B is also worth considering.

In HB there are of course a bunch of traps. But there's also Thomas Haas. Now normally Mr. Haas doesn't work very well as an economy option since you pay 1 + 1 to advance and each advancement token is worth 2 which is by usual Netrunner standards worth less than a credit and a click. With Back Channels he becomes worth more and you still have the option of dumping him if the runner goes for him. That said, I think I prefer a Cerebral Overwriter.

All in all a quite good card, mainly for trap decks where a hedge against failing traps is welcome.

(Station One era)
Silv 296
It's pretty flavorful, actually. Other corps contact Weyland with info about their failed projects, and Weyland finds a buyer who has a use for them. — LordRandomness 2 Apr 2017
Yeah, by selling it to local punks. There's profit to be made everywhere, right? And if vandals use our stuff to mess with public property, we could always make a profit off the renovation contracts... — H0tl1ne 3 Apr 2017
@LordRandomess Yeah, flavorwise that makes sense. Gameplay wise, well, I'm just glad it's only 1 to splash. :) — Silv 3 Apr 2017
Just realized this works with Anson Rose as well. — Silv 6 May 2017
3

Turn every failed trap, every mushin'd-and-avoided thing into a GRNDL Refinery? That isn't shabby at all.

At one influence, it's splashable - able to turn a PE trap deck into an economic engine.

What's not to love, here?

(Old Hollywood era)
Shannon.L 113
The fact that it does practically nothing for Weyland in faction? Unless you are playing BABW and spending all your influence on traps, but BABW makes tons of money already, so why include it? — WayneMcPain 12 Aug 2015
You know what's better than tons of money? More tons of money! Import the Junebugs and Ghost Branches, run 5 agendas, and run a shell game inside a glacier. — mrdudesir 12 Aug 2015
I reckon this card could be very useful in Weyland, if you're using Expose (the NBN card, I can't type the fancy French E) to lose BP. If you have an Expose you can't find a use for, Back Channel it. — Thaddux 13 Aug 2015
Also remember that Shattered Remains is a thing in Weyland, and if they dont fall for you using it to fake a Government Takeover... — WarpGhost 16 Aug 2015
PLAN B! THIS MAKES PLAN B PLAYABLE! A little bit. Sort of. — Wookiee 17 Aug 2015
Seems super good to me. Mushin and advance a junebug. If they run it, you win. If not, advance it twice and use this card the next turn netting you 15 credits in 2 turns! — quailman2101 25 Aug 2015
How about a Gagarin deck with Junebug, Plan B, Mushin, Back Channels and Scorch? Just go all out with advancing stuff and leaving it on the board. — tendermovement 29 Sep 2015
It also works a treat if you bang it in a HB rig with Cerebral Overwriters. I've been using it in a kill deck that has COs, if I use a Mushin on one of them and the runner doesn't take the bait then it's a free 9 credits. — Jona 4 Nov 2015
Just wondering how it'll work with Thomas Haas. I guess they won't be a combo? — BlackTree 28 Nov 2015
It doesn't work with Thomas Haas. You either use Back Channels to trash Haas, or you use Haas to trash himself. You get one effect or the other. — Dragoonkin 7 Jan 2016
Playing this with Mushin in one turn amusingly turns Mushin, this, and whatever card you Mushin down into three Beanstalk Royalties. But hey, sometimes that's what you need! — LordRandomness 9 Jun 2016