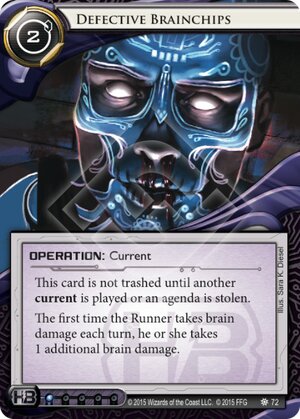 interrupt – The first time each turn the Runner would suffer brain damage, increase the amount of damage by 1.

Netrunner is as much, if not more, psychologically than rule-and-optimization rewarding.

The person sitting across the table could have all of his jank pieces in hand, and feeling confident. And then you lay this on the table.

Fundamentally, this changes nothing about their game plan. Or it shouldn't. This current has no mechanical effect on what the runner does. But if you're playing a Humanity Upgraded Xanatos Gambit-style deck, this card does something different even if its effect never comes into play:

You've substantially raised the penalty for failure. Hourglass into Ryon Knight. Howler into Janus 1.0. They're far less likely to run on the card you just Mushin No Shin'd out (Mandatory Upgrades) for fear of +1 Brain Damage when they've already functionally suffered one simply by you choosing HU as your ID. Or if you've played the same opponent for a while, they think you're counter-bluffing and maybe that is a Cerebral Overwriter on the table.

A runner will float a brain damage or two. Nobody wants to float three or four. I believe that this card is a solid 1-of in Xanatos cheese decks for the psychological deterrence effect alone.

And with a Brainstorm looming on the horizon, this current will make the brain damage equivalent of facechecking Komainu with a scored House of Knives token, melting the unprepared Runner's cerebral cortex into a thin, lumpy soup.

BOOM. The current I waited so much time. This means that an Edge of World with 1 ice makes 2 brain, Cerebral Overwriter has 1 more advancement and Cybernetics Division: Humanity Upgraded is happier. There is a damn good combo with Sentinel Defense Program (combo = 4 damages for 1 brain) but this is another thing. A very good current.

(Order and Chaos era)
SlayerCNV 249
I wonder if it works with an unadvanced Cerebral Overwriter? You could pay three to do 'zero' brain damage, which would then be increased to one. — Jashay 3 Mar 2015
I am pretty sure that it being "1 additional brain damage" modifies the original source to do one more, rather than do a second instance of brain damage. So if you do 1 brain damage Defective Brainchips makes it 2 brain damage, and SDP deals one net damage because at least 1 brain damage was dealt. — PaxCecilia 3 Mar 2015
@Jashay: Cerebral reads: "do one brain damage for each counter", so it requires at least single counter to do any damage at all. Therefore, Defective Brainchips won't trigger with empty Cerebral. — quiciuq 4 Mar 2015
Are you sure? Compare it with Sentinel Defence Program, which has the 'at least one' qualifier. Also, DBC doesn't say 'any' or such language. And I can't see why you couldn't fire Cerebral Overwriter for 0. I guess I'll ping Lukas when the card is officially released — Jashay 5 Mar 2015
If it works with a 0-advanced CI, it'll work out of R&D, HQ, and Archives. Hella scary. — rymosrac 16 Mar 2015
>CI — rymosrac 16 Mar 2015
I think it's fairly clear (to me, anyway) that it will not work with a 0-advanced CO. The card says, "The first time the runner takes brain damage..." Taking 0 brain damage is not taking any brain damage and so this shouldn't fire. I mean, think of it this way: almost every instant in a game you are taking 0 brain damage, and it certainly doesn't fire off of that... — Sabin76 6 Jul 2015
Throw in Tori Hanzo to the Sentinel Defence Program combo and then for one landed brain damage, you're getting a total of three brain damage and one net. Expensive and combo-riffic, but hilarious. — LeonardQuirm 8 Jul 2015