Your maximum hand size is increased by 5.

"So much to do. So little time."
Neutral • Antonio De Luca • Breaker Bay 31
All sets:
Links: Decklists | ANCUR 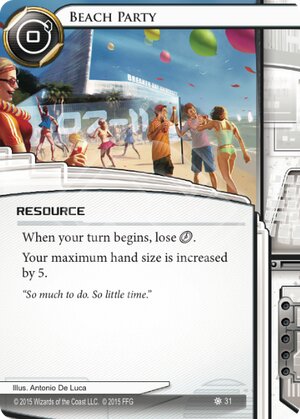 This card has me looking forward to other SanSan Cylcle cards like Vintage T-Bird, Middle School Sockhop, and Rodeo Drive Bristro as they all perfectly exemplify ANR's Cyberpunk setting.

Maybe it's time to slow down on the Data Packs for awhile, FFG.

(All That Remains era)
4dd150n 140
So far, most cards that have affected grip seem to be related to the mental state of the runner (with Borrowed Sattelite being the exception). I'm in agreement with Addison, this card seems somewhat out of theme; both for netrunner (even with the campus overtones), and also for the current conception of what the hand size is. — diracdelta 2 Mar 2015
I don't see a theme in cards that increase hand size for the runner: [Public Sympathy](/en/card/02050), [Borrowed Satellite](/en/card/03050), [Theophilius Bagbiter](/en/card/05049), [Origami](/en/card/06074), [Box-E](/en/card/06055). I rather like the fusion of the old and the new, we always seems to look back fondly at the past and it seems the android universe is no different. — The Buzzing 25 Apr 2015
Because in the Cyberpunk future there are no beaches, just desolate cityscapes by the sea? I don't really mind the variety, yo. — mrdudesir 27 Apr 2015
What's wrong with taking some time off to hide amongst the millions of other people celebrating? — KaynSD 27 Apr 2015
3

Okay, okay, the theme isn't great. "Hand size" is one element that hasn't been clearly defined mechanically: evidently you can get it from Public Sympathy, but also from specialized programs, satellites, consoles, Mental Health Clinics, and even a sleazy neckbeard. And now evidently you can spend all day on the beach and get the same effect?

But writing that off, how does it match up mechanically?

First obvious thing is that "lose a " cards are pretty much universally terrible if you aren't running Adjusted Chronotype, or, at a bare minimum, Aesop's Pawnshop/Chop Bot 3000 to get rid of them when you need your clicks late-game. But, of course, this means that you now have a two-piece combo, minimum, which costs influence outside of Anarch or Shaper.

So what is hand size good for? Well, it lets you build up a nice buffer against kill decks; having more than 5 cards in your grip makes it pretty hard to Scorch or Ronin you. But against a glacier deck like ETF or Replicating Perfection, that doesn't matter, and besides, Plascrete Carapace is enough in most cases. However, we're already seeing the "negative hand size flatline" deck show up with Valley Grid, and the upcoming Cybernetics Division: Humanity Upgraded and Self-Destruct Chips promise more of the same. Beach Party is probably the single strongest counter to that sort of deck.

That's probably not enough to warrant deck slots for all the pieces you need to make Beach Party work. You need something to make a large hand size actively help you win, instead of just passively helping you not lose.

A large hand size is only actively useful if you're using it to hold cards, which means you need good card draw. Quality Time and Duggar's are extremely efficient card draw, provided you have some way to handle that many cards. Note, though, that if don't have an Adjusted Chronotype, you can't actually use Duggar's since you need to activate it. Wyldside is also a good draw engine, but then you need Gene Conditioning Shoppe to trigger the Chronotype twice. But let's be real here; you probably want to be running Game Day, because drawing 8 cards in two clicks is disgustingly efficient.

After that, go nuts. Play out complicated combos. Drop Ekomind and Sage, or get an Overmind with a bazillion counters (just watch out for Cortex Lock.) Spam out Amped Up, Stimhack, and Stim Dealer to juice up with all the clicks and cred you can handle--who needs brain cells anyway? Or just run a deck full of "silver bullet" programs, use the ones you want, and Freelance Coding Contract the rest in the bin.

I don't expect to see this card in tournament play; it's just too inconsistent with the current card pool. But if you're in the market for some grade-A jank, look no further.

(Breaker Bay era)
tiedyedvortex 4560
It doesn't matter how rocking the Beach Party is, friends don't let friends run Ekomind. — GordonsBeard 25 May 2015
I think hand size is directly related to the fatigue or mental stress of the runner and thus their ability to manage and utilise information. Too much stress on the cranium and you'll get yourself some Jinteki flavoured haemmorraging. Folding origami birds is meant to be meditative and both Public Sympathy and Beach Party indicate the runner getting a bit of TLC time when away from the computer. Borrowed Satellite's an odd one but it's an early card so they may not have had come up with a theme yet. I guess having a full satellite at your disposal makes information management easier. — Genevaman616 14 Jan 2016