Use the MU on MemStrips only for virus programs.

"The trick is remembering which virus you loaded onto which strip. That's why I draw emoji on 'em. Then I just have to remember which emoji stands for which virus." -Princess Space Kitten
Anarch • Maciej Rebisz • Order and Chaos 46
All sets:
Links: Decklists | ANCUR 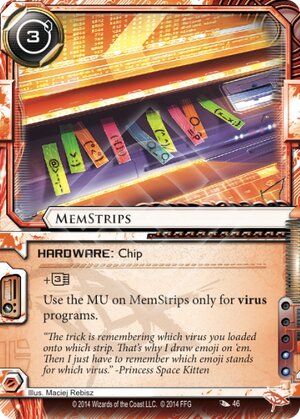 MemStrips - you simply must read the flavor text. Do it now!

Apart from the awesome flavor text, the card is solid: it's the most memory you can have in a single card (the other 3MU providers being Deep Red and -sic- Monolith). There's only one small catch: you have to use this memory for viruses.

The obvious uses of this card are thus the following:

I have nyaa~thing else to say about this card, except that I can't wait to play a runner id called "Princess Space Kitten".

First, in most anarch decks you just want to play Grimoire if you need extra mu. This topic is not an argument that memstrips is a better card than Grimoire. It isn't. It's not even debatable. The extra 1mu is rarely required for an anarch deck to function.

The reason you play memstrips is because you want a console that has a more relevant ability for your game plan, but you still need more programs than 5 mu would allow. Which means that its in direct conflict with a few other cards:

If you watch expert players play, they often get around needing memstrips by only installing programs when they need them. But not all decks can function by face checking and figuring out what they need; and not all of them are meant to play lightning fast. So, when you're building you need to consider the risks. If you're already taking desperado into something like valencia, and you already have early game pressure from desperado, memstrips makes sense for those late game parasites or programs that are showing up later than you'd like them too. Memstrips lets you build your rig out as you find it a bit easier than the seemingly easy answer. And it gives you overflow should you need it. That said, dyson mem chip will often be just as good if you don't plan to overflow past 6 programs or use that extra mem to generate credits.

So Memstrips is still a highly conditional card, for inclusion, and its usually part of a deck that needs to rig out around a powerful console. This ultimately means that if your deck doesn't get extreme momentum in the early game, the Memstrips is probably a card you don't want in your deck if you're using a non-grimoire console. A leaner deck may in many cases be more effective if you plan to finish your games early. If you're planning on pushing the game to the late game as valencia does, now you just have to decide if you need link or the ability to play with extra mu. Sometimes if you're only running 2x of a console in a 50 card deck, you can play with just a memstrips over a console. Its not a horrible place to fall back to. You're still hitting that 6 mu, which you won't with a single dyson.

So, there's an argument for a deck that wants memstrips. It's still not an amazing card, but its by far not the worst card to come out of order and chaos.

I'm very glad this card exists, but I still don't know if it will ever make the cut in any of my virus decks.

For one thing, Grimoire (which is an auto-include in your virus deck), already gives you +2 MU. And assuming you aren't using any beefy programs like Keyhole or Morningstar, maxing out your RIG with 6 viruses is quite rare, even for the most extravagant Noise decks. Parasites will cycle in and out and Caches (along with many other programs) will be traded to Aesop. Very rarely have I ever found myself with 6 virus programs out and wishing I had more room on my RIG.

Also, considering Progenitor and Djinn are other ways to reduce MU, I don't see Memstrips being necessary. Now, if you wanted to leave Djinn and Progenitor behind, then yes, maybe Memstrips would be worth it.

So MemStrips it's a good card if not a little odd. After all if your running a virus deck you've got Grimoire which is generally enough MU.

The only way it makes sense is when you not running a virus deck but have some in so a normal Anarch deck really that want to run another console. It seems designed for use with Vigil / Spinal Modem really. It also isn't unique and works with Overmind so it may see use their like Deep Red dose.

I like the card and it will see some play with low +MU consoles or with Overmind / Sage other than that it's not really gonna see much use.

Not Unique unlike consoles so u can have multiple of them down.

MU only usable with Viruses

Grimoire is usually enough MU for a virus deck.

3 credits 3 MU. A pretty good deal if you need the extra utility. If you can't utilize the full effect though, the Dyson option provides just a little bit of link, which could save a little money against tracing ice, but even if you only need 2 memory more than what your console supports, this is a good deal. Cybersolutions has been in some of my shaper decks, and this is basically the anarch version. A bit less flexible, but bigger, and at the same cost even though anarch does not get the Mac credit.

Compared to Djinn, the fact that the vira does not need to be hosted is a big upside. Djinn needs to be on the table before the vira hit, this doesnt. A card installed on Djinn cannot be hosted on scheherazade, and parasites cannot be hosted on Djinn. Djinn does give the tutor abillity in trade for this though, and with earthrise as an option to replace wyldside, there might even be time to use that.

Additional support for Overmind and Ekomind, in a similar way that Deep Red was used for Overmind previously; but perhaps even better, since the memory from MemStrips is more flexible for utility with viruses, which are generally essential to the anarch play-style.