As an additional cost to play this event, spend clickclickclick.

"Hello thank you for vidding MegaBuy I'm Carol how can I help you."
Anarch • Matt Zeilinger • Order and Chaos 36
All sets:
Links: Decklists | ANCUR 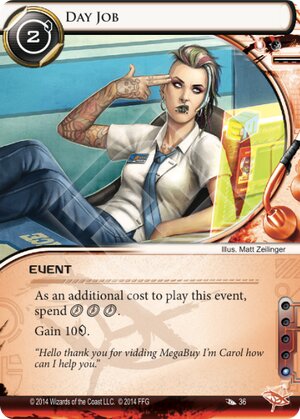 Here are some of my possibly controversial ideas about a reasonably talked about card : it's overrated.

In short, I'm not convinced the payout is worth the clunkiness and lack of flexibility for most decks.

Take my opinions with a pinch of salt; it hasn't been out for long, but snooping here and on a couple of forums it seems like there a couple of players (who are better than me) coming to a similar conclusion.

Playing a Day Job is +4 credits (ignoring clicks to draw in all analysis). This 1 better than Sure Gamble, and equal to Lucky Find. However, how often do you play Lucky Find (which is what I'm basing my analysis on) and then click twice for credits? I assume it's not that often.

By Playing Day Job you also sacrifice all the traditional advantages of event economy; the abilities to surprise your opponent and be more flexible in your click use. In that sense it isn't really an event, Lucky Find basically will do all the same things with the folllowing advantages:

-You can run the same turn!

-Can be played the turn it's drawn.

-You can combine it with other econ.

-Can be economical with Same Old Thing.

Now there's been a lot of talk about using the with Prepaid VoicePAD, however I'm not convinced a prepaid deck would be worth it in Anarch without Kate "Mac" McCaffrey: Digital Tinker, Diesel, Quality Time and Levy AR Lab Access in faction. Subbing it into Kate, it's a strictly worse Lucky Find that saves you 1-3 influence. It might be worth swapping one in a couple of months to make room for Clot; however outside of that I think the impact on your ability to pressure remotes is too dramatic and is an underestimated impediment on how a deck like Prepaid Kate wants to play.

It is possible that that these factors could be mitigated by some of the click acceleration in the new box, however I don't think it's worth playing those cards simply to make Day Job more like Lucky Find. Places I think it could be used include as 1-2 of in Anarch decks wanting to play a slightly longer game / pressure glaciers, and decks which manufacture their own threats. By this I mean those using cards like Vamp where you have to worry less about your ability to respond to the corps actions. I would like to note that I don't think Keyhole on its own is sufficient for this as it doesn't allow you to dictate to the corp enough to stop them winning before you do; you run the risk of getting taxed out while the corp is still able to score (especially because of the way Day Job turns create windows).

It seems like I've taken up a lot of room, and still could say a lot more, but I feel fairly pretentious writing this much. Thank you for reading, hopefully I've been fairly clear. It's surprisingly hard to get thoughts down coherently! :)

(Order and Chaos era)
whirrun 126
Well, of course that Lucky Find is better than Day Job, it also costs 2 Influence, no matter what color you use, so you will pay for that quality with 4-6 less influence in your deck. If you are an anarch, your other options for economy are Liberated accounts, which is an even bigger tempo loss than Day Job, Queen's Gambit, which can be risky sometimes, and others it can be outright unusable if the corp doesn't use assets or upgrades and that's pretty much it outside of standard economy cards like Sure Gamble (of which you already had 3 copies) and Dirty Laundry which is also a pretty bad economy card unless you are running Desperado and Security Testing. Seeing the options, I'd say Day Job certainly does have a place in anarch decks that don't wish to use their influence on mostly economy cards. I would never splash for it on other factions though, that I'm also sure off. — razhemnet 9 Feb 2015
Fair enough :). I hope I didn't sound arrogant or condescending in my review, it's the first I've done and I should probably have drafted it first. I agree with you about not splashing it, and wanted to say something given the number of people I've heard calling it 3 free inf for kate or claiming that it solves all of Anarchs econ problems. I'm not gonna write a long post of halfbaked thoughts here though, but thank you for taking the time to read the review. — whirrun 12 Feb 2015
Also @Alsciende, if you read this, it seems I can comment here but not on decklists if thats any help. Thanks for picking that up and loving the new features being added! — whirrun 12 Feb 2015
I think no many runners could spend their turns for credit. Buuut I'm running this in a valencia deck with prepaid (with lucky find and sure gamble too) and the deck is AMAZING. But Valencia can spend the entire turn for credits. — SlayerCNV 23 Feb 2015
[Planned Assault](/en/card/05036) anyone? I'm surprised I haven't seen this interaction mentioned yet. — iBreatheBullets 4 Apr 2016
@iBreatheBullets well yeah, it's cuz it doesn't work. Planned Assault can only combo with a run event. It would be sssweet otherwise though — beladee 23 Jun 2016
1

This card will be in a lot of Anarch decks. It simply has none of the drawbacks of needing to be built around or having half the effects negated like Duggar's, and works out to be a Magnum Opus turn of credits.

Being 1 Inflence, it might see play in Prepaid VoicePAD decks as a compliment or replacement to Lucky Find. Especially Anarch versions that are sure to come.

(All That Remains era)
Orbital Tangent 163
Day Job is supposed to be played with Amped Up (+2 net clicks). Amp to Day Job leaves with with 10 credits and 3 clicks. It may not be economical, but that's the play. — fetish 14 Oct 2015