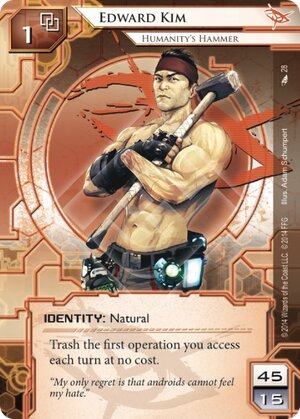 Trash the first operation you access each turn at no cost.

"My only regret is that androids cannot feel my hate."
Illustrated by Adam Schumpert
Decklists with this card

Edward Kim is an Identity card with an ability that seems entirely straightforward, but actually offers a surprising number of useful side-effects for the discerning Anarch. First, let's discuss the obvious power he wields:

For many people, I suspect this is where analysis of Edward Kim ended. His ability seems certainly interesting at just this stage, but it's not got nearly the zing of Noise's systematic meltdown of the corporate deck, MaxX's flood of cards from your OWN deck, or Valencia's guaranteed potential with the powerful Bad Publicity-enabled cards. This is a mistake, as Edward gives you access to several intangibles that are not immediately obvious but nonetheless are nearly as powerful as the face-value effect of his ability.

The final question you're likely to be asking is, What kind of deck does he do well in? Well, that is the catch.

(Order and Chaos era)
umbralAeronaut 795
I've been playing Ed since he came out and this review of him hits the nail on the head. I Totaly agree with this review his greatist power comes from shutting down win conditions like Scorched or Biotic & Plascrete just isn't needed hell I've had worse usually just gets played for draw i find. One thing he dose well is punish an undefended HQ or R&D just keep running to see more cards thanks to his ability and assessts. All in all this is a great review. — Pinkwarrior 21 Feb 2015
I like your idea of central breakers splash, but only for one kind. Breach is inferior the the in-faction Corroder, and Mimic+Cuj.0 are better than Alias, which is probably the weakest central. That being said, I can actually see Ed splashing Passport over Zu, but is +1 strength worth it over being able to run remotes? (not to mention the inferior boosting effect) — Kroen 21 Feb 2015
Actually, after writing my reply, I don't see the point of splashing Mimic over Zu when they're the same influence. If Ed was a criminal or if Passport was 1 influence I'd agree. — Kroen 21 Feb 2015
(and by Mimic I mean Passport) — Kroen 21 Feb 2015
That's true. I hadn't really looked closely at the central breakers in comparison to other options when I wrote this piece. I'll probably edit that line out. — umbralAeronaut 21 Feb 2015
8

With all the noise about MaxX: Maximum Punk Rock chaos and solid Bad Publicity play that brings Valencia Estevez: The Angel of Cayambe, the third identity from Order & Chaos may look less exciting. Nothing futher from the truth.

Edward Kim opens brave new levels of threat that corporations must react to. Remember how many times before you didn't rez ICE on HQ, beceause there was no agendas in your hand? Just some Scorched Earth or Restructure waiting to be played? Yeah, Kim will take care of them. Without the Imp.

This is the same with R&D - do you really want to not rezz your defences there so he can trash your Celebrity Gift or Biotic Labor for free? Yeah, that what I thought. Corporations must react, because Kim can easily destroy any combo play they were preparing in their HQ. That Wayland looked very manacing until he lost all the Scorches. Sorry for your lost Midseason Replacements NBN. Not.

I guess taking Imp to his deck is no-brainer. With it installed, you can destroy up to two non upgrade/asset cards per turn. You will probably also need Medium to dig deep into R&D and hit all the important cards. At this moment, there are 65 cards in the game that Kim can destroy. For FREE. netrunnerdb.com

Kim is a new threat for R&D and HQ. And this is something that can't be ignored.

(Order and Chaos era)
konradh 278
Indeed - I've been told that any time an Imp has two or more counters on the corp's turn, the right move is always to clear counters. Well, Kim is a recurring Imp. The only thing a Kim deck can't destroy is Ice. It means that suddenly, R&D is more porous. Normal runners hit Hedge Fund in R&D, and move elsewhere. Kim destroys it, and sees another card. He's a much more low-key ID, but he's very much a nice ID. — Wookiee 13 Feb 2015
Still the ID seems underwhelming when building a deck for it. I would like to trash the first Operation you encounter each run, not only once per turn. Not a big difference but it will make the medium runs more effective and the Nerve Agent equally more effective. Dunno, as it is right now i think that is the leat powerful one. — ZiNOS 18 Feb 2015
4

With the rise of decks based around Jeeves Model Bioroids as the premier Fast Advance option since the restriction on AstroScript Pilot Program, is it now Edward's time to shine? Since Jeeves decks tend to focus on Operations to install and advance agendas, he seems very well placed to cause problems for them. Sniping key Lateral Growths, Shipment from SanSans or Biotic Labors forces the corp to play fair or aggressively ice their central servers - leaving them less protection available for the Jeeves remote. Add in the fact that he has native access to the Anarch breakers and tricks we all know and love and we could be seeing a new player in the latest metagame.

(23 Seconds era)
ksym77 34
Not to mention the powerful Terminal operations like Hard-Hitting News and more meat damage on the way in the form of Boom! Plus he has a link, which is not nothing. — WayneMcPain 15 Jul 2016
1

O&C is out for almost a month now and the Anarch buzz is going through the roof (even more than when Cache came out). Everything konradh has said is pretty accurate. The amount of Jank decks are insane, but janky decks fluctuate in power level. There are two things I wanted to add to it just how Kim is (or at least how I envision it):

(Order and Chaos era)
DrunkAlex 328
I want to use him so bad, I am going to go to my 5 deck try after reading this. UGH, I can make it thru this, I will succeed! — rezwits 16 Feb 2015
Ed is far more powerful than Wizz if you look at them both with imp. Wizz use's imp to trash non-assesst's something every runner dose with imp he just pays less to trash assest's. Kim on the other hand trash's operations for free and can still use cash to trash assest's so only really needs the imp for other cards which is erm ICE the occasional Agenda? thats a massive differnce. — Pinkwarrior 21 Feb 2015