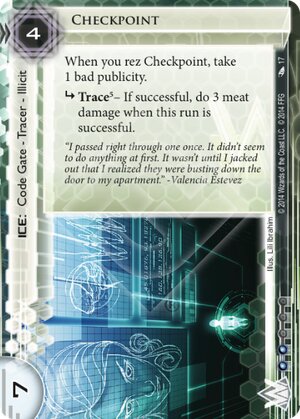 subroutine Trace [5]– If successful, do 3 meat damage when this run is successful.

"I passed right through one once. It didn't seem to do anything at first. It wasn't until I jacked out that I realized they were busting down the door of my apartment." -Valencia Estevez
Illustrated by Lili Ibrahim
Links: Decklists | ANCUR

Weyland roars into the world of astounding code gates with this powerful piece of ICE! It is enormously strong for its cost. The effect really shuts down Desperado-based decks on that server. In most cases, it will be cheaper to beat the trace than to break the subroutine with icebreakers. In many other cases the Checkpoint's appearance will signal a hasty jack-out by the runner.

Checkpoint is a weird card, and I'm glad it exists - because Code Gates, IMHO, should require you to twist your brain to use/defeat them effectively.

Clearly 4 for a strength 7 code gate is great value, and on the face of it, trace 5 seems pretty strong - and how often can a runner sustain 3 meat damage? I've Had Worse and Plascrete Carapace not withstanding.

The thing is - I would say that Weyland does not trace well. SEA Source works fine in Weyland because it's a one-off trace that usually leads to a flatline, and if there's one thing that Weyland does do well it's having a boat load of disposable - but Checkpoint is not usually a one-off end-game trace, it's a subroutine trace that may well fire repeatedly. Spend too much money tracing, and the runner can simply jackout and run again - slowly draining the corporation coffers.

The other thing that Weyland does well, of course is Bad Publicity - giving the runner free credits to spend to help evade the trace. Suddenly the trace 5 looks more like a trace 4, and if you're also playing with Hostile Takeover (and why wouldn't you?) - well, it doesn't take a huge amount of to render Checkpoint pretty tame.

So what is Checkpoint good for?

Checkpoint could make for an interesting splash in protecting Jinteki: Replicating Perfection remotes - synergising with Excalibur and Enhanced Login Protocol. When each is a precious commodity, jacking out to re-run doesn't always seem like such a good option.

For protecting centrals, splashing Checkpoint into NBN: Making News with ChiLo City Grid works really well - but if you're playing NBN you already have access to Gutenberg so Checkpoint is probably overkill (and if you're that determined to tag the runner you probably want to save the influence for Scorched Earth and Traffic Accident).

(I cannot think of a single example in HB when you would want to splash this card - but I would love to hear some.)

@MrWeasely has already mentioned the synergy with The Cleaners - if you are playing wide (Gagarin Deep Space: Expanding the Horizon kill deck new meta?) then Dedicated Response Team is probably also a good idea. Maybe in the server protected by Checkpoint (trollolololol)

(Kala Ghoda era)
Kikai 463
When is trace not a trace? Answer: when the runner can't afford it. Weyland has some cool tools to tax economy, like Gagarin Deep Space, Contract Killers, some nifty sentry tracers. This is a way to go with Checkpoint - if they can't break it or beat it, you beat them. Hard. — H0tl1ne 8 Mar 2016