Asteroid Belt can be advanced and its rez cost is lowered by 3 for each advancement token on it.

His belt of stone did shake and shatter.
Weyland Consortium • Seage • Order and Chaos 12
All sets:
Links: Decklists | ANCUR 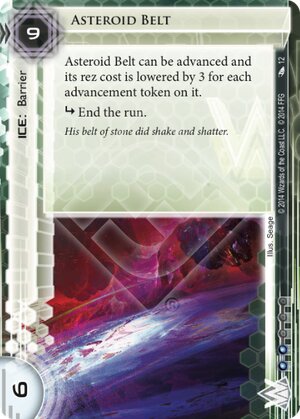 Some people say that this is really just a worse version of Fire Wall, and in many ways, they're not wrong. After all, after and 1, there's basically no difference between a Fire Wall and an Asteroid Belt save for the fact that Fire Wall can continue to grow in strength while Asteroid Belt cannot.

In short, there's a place for both of these cards, and it would probably do you good to consider which card will serve you better.

(Order and Chaos era)
postalelf 67
Also of note is the advancements on asteroid belt can be moved to fire wall via constellation, so they kind of complement each other. — joebill42 23 Mar 2015
2

I am in agreement with the other review on here about Asteroid Belt and I see why many people pick Fire Wall over this. I won't go over the synergies mentioned below again, but there is one big one that needs to be highlighted here...

Asteroid Belt + Priority Construction +Trick of Light. Playing an Asteroid belt using Priority Construction during the first turn or two of the game gives you a free-to-rez Strength 6 'End The Run' wall which is a show stopper for pretty much all runners aside Apex in the early game. Once rezzed, Trick Of Light them onto your other advance-able ice or agenda and worry not. Of course, it's a pain if you get de-rezzed, but the decks doing this are in a minority right now. I'm finding Asteroid Belt to be a real strong opener for fast advance and if you feel attached to Fire Wall, include both and Trick Of Light the tokens over once rezzed.