Gain 1credit whenever you jack out.

The datastream slipped away, and it felt like being born for a second time, if only you could remember the first. A rush of air fills the lungs to bursting, and you gasp it out, coughing and choking as the dim lights of the room shine with the brilliance of a thousand suns.
Criminal • Crystal Ben • The Source 119
All sets:
Links: Decklists | ANCUR 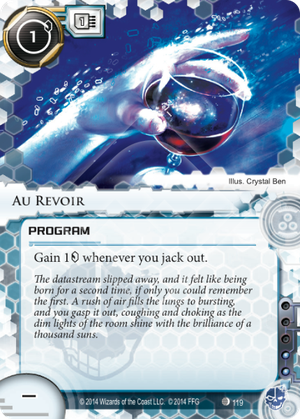 Look. I'm going to be brief. This card enables the most powerful sustainable economy in the game. Even if you use SMC to get all 3 out, spending nine credits, remember that Netrunner games go long. The amount of money 3 Au Revoir will get you compared to Opus is nuts. That said, it's a memory hog, and it's not easy to get out. It's not for everyone. It's probably meant for very few. But after running this for the past month, I know it's meant for me.

(Order and Chaos era)
afishisborn 2723
"This card enables the most powerful sustainable economy in the game" Aesop's does better without using a click and 3 MU and being one card. Oracle May does better, same advantages as Aesop's. 2 Data Foldings, 2 Underworld Contacts, same value, no MU issue. Au Revoir is not "the most powerful sustainable economy in the game" — netdeckdane 1 Mar 2015
Oracle May, Aesops, everything you've listed is fine once per turn. This is every click. You would need 2 Data Folding, 2 UW Contacts, and four clicks of Opus to match four clicks of jacking out for credits. — afishisborn 1 Mar 2015
Netdeckdane, I'm really curious how you're using those cards to click for 12 credits every turn. — daytodave 1 Mar 2015
With 3 Au Revoir out, you can make a run on an undefended server, and jack out in the window before you access to gain 3 credits. With Snitch, you can repeat that process on any server. — tiedyedvortex 2 Mar 2015
If a server is unprotected and you run on it, you have to access — DrSleepless 2 Mar 2015
2 cards, 1c each, 2 mem, against single 2 mem 5c MOpus... Like you said, it's certainly not for everyone, especially whey you are too low on memory to run three of them (only then it's more effective than MO). — quiciuq 2 Mar 2015
not true, there is a jackout window during the approach. still not amazing as econ engines go as there is no guarantee of a server being unpeotected. — king_mob 2 Mar 2015
my last comment was @DrSleepless — king_mob 2 Mar 2015
1. The Runner initiates a RUN and declares the ATTACKED SERVER. • If the attacked server has one or more pieces of ice protecting it, go to [2]. If the attacked server does not have ice protecting it, go to [4]. — Dydra 2 Mar 2015
4. The Runner APPROACHES the attacked server. 4.1 4.2 The Runner decides whether to continue the run. ...Either the Runner JACKS OUT: go to [6] ...Or the Runner continues the run: go to [4.3]. || P.s. Learn the game || D — Dydra 2 Mar 2015
I thought thats what i just said? Unless you werent directing that at me? — king_mob 3 Mar 2015
This plus Snitch is just hideous from a corp view. Runner gets cash and information at the same time. — BruhahGand 27 Apr 2015
This will be a fun card to tinker with when Nero Severn comes out. — Bilbo Batten 7 Nov 2015
@BilboBatten My thought exactly — PanzerD 14 Dec 2015
In defence of the original post, 1 copes of this installed are equivalent to Magnum Opus, for marginally cheaper, and no influence cost in Criminal, with the caveat that having only 1 installed is of marginal benefit. Having three installed is the equivalent of a click for 3 credits, which is huge. Probably worth putting in at least 1 SMC for that (which is using up some of the influence you saved by not including Magnum Opus, but with a benefit of more flexibility in your deck). — CascadeHush 17 Jan 2017
Also, it combos with The Turning Wheel. You can rack up turning wheel power counters whilst getting credits. I haven't tried this yet but I just ordered The Source and I can't wait to try. — CascadeHush 17 Jan 2017