Place 4 power counters on Cerberus "Cuj.0" H3 when it is installed.

"He only likes to eat live meat." -MaxX
Anarch • Liiga Smilshkalne • All That Remains 94
All sets:
Links: Decklists | ANCUR 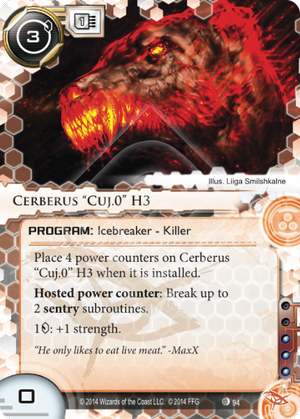 Of only two in-faction Killers, Cerberus "Cuj.0" H3 is the one without fixed strength, which means it's range of usability is greater. But is it, really?...

At ICE strength 0, there are exactly three sentries (excluding variable Dracō): Pup, Rototurret and Burke Bugs. Cuj.0's ability to pass the first two effectively for free is noticeable, but that's virtually it - Mimic's got covered all the other Sentries up to strength of 3 with better efficiency (or at least not worse), with possible exceptions of Komainu and Tsurugi.

So it's real hunting grounds are Sentries with strength of 4 or more, especially those with more than single subroutine - the top stars here are of course Ichi 1.0 and the dreaded Archer, with an occasional Shinobi here and there. But it costs 6 to fully pass trough an Archer and 8 to deal with Janus 1.0! And you can do this only twice! Is it really worth it?...

Definitely. The most efficient Killer to date, Faerie, is single use and costs 3 influence. In builds making extensive use of Shaper shenanigans, three inf is huge. Cuj.0 fills the same niche in Anarch decks, and while it has less base strength, it can be used up to four times and it's higher cost has advantages - Faeries quite often fall prey to cheap Power Shutdown. And while sometimes it is overshadowed by D4v1d, remember, that David will drive you through the Archer once and Ichi 1.0 will make laughs of it - while the dog will eat them both and still be hungry for more!

While it's role is rather as a supportive breaker, not the main gun, yet within decks built around infrequent, high-impact runs (like deep RnD digs) it can be incredibly powerful.

(Order and Chaos era)
quiciuq 38
Like most Anarch icebreakers, this card is designed to be used most efficiently with ice strength-sapping cards (Datasuckers, Ice Carvers, et al.). It's fairly easy to drop most sentries down to the point where this card costs very little to use... though at that point, why not just use Mimic? — KitsuAeryn 19 Mar 2015