When the Runner encounters Merlin, you may reveal up to 2 grail ice from HQ. For the remainder of this run, Merlin gains the subroutines of the revealed ice in the order of your choice.

He who holds the staff of wisdom.
Neutral • Andreas Zafiratos • All That Remains 91
All sets:
Links: Decklists | ANCUR 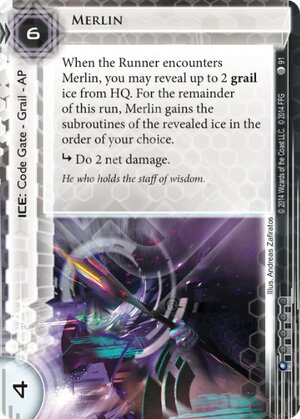 The big daddy of the Grail suite, this punishes early facechecks at a substantial cost, but if you're living the dream and somehow manage 3x in your opening hand, it'll be one of the shortest games you've ever played.

Blue Sun: Powering the Future is a good ID to run Grail out of, if for no other reason than to bounce it and redeploy, hopefully keeping the runner on the back foot. Tenma Line can be fun for the same reason, if your Grail pieces are hopefully still unrezzed. There's also the notable interaction with The Foundry: Refining the Process, fetching your pieces for you - you could go all in with Executive Boot Camp here, but the loss of surprise makes it far less appealing.

TL;DR for maximum hilarity, but what runner in their right mind is going to continue when on their way to an unrezzed ICE with the Corp at 6 or more credits? Whirlpool helps, but as with all trap servers it takes an unrealistic amount of setup. Susanoo-No-Mikoto into a Grail trap over Archives sounds fun, but for the life of me I can't think of a situation in which I wouldn't rather use that much cash for something else.

A money-heavy Sunny Lebeau: Security Specialist laughs at your Grail combos, as does Apex: Invasive Predator with Hunting Grounds up. Most other runners can manage Grail ICE with not a whole lot of difficulty barring Corporate Troubleshooter or other such shenanigans.

Fun? Absolutely. Tier 1? Seems like it would take a lot of work to make something that situational viable and consistent, and I think most competitive ANR players can find much more reliable ICE distribution strategies that don't tax already tight influence.

(Data and Destiny era)
GrantZilla1979 394
I think this is over-thinking it. I agree that big wombo-combos aren't a great use of the Grail suite, and that the suite will be overcome by late-game runner inevitability (pretty much every ice suite is). The main power of the grail suite is that it's a horror to face-check. Barriers that do two net damage or trash programmes simply don't exist anywhere else (Wall of thorns, but that's not good enough to see real play). Code-gates are increasingly scary, but Merlin is still an unusually nasty one to find if you're unprepared. Plus the suite is fairly effectively taxing to every set of icebreakers that isn't Sunny's. Merlin is pretty much the only time you're happy to be running Striker — Greasythumb 28 Dec 2015
They are deadly to face-check for sure. Even as a gear-check, they aren't necessarily safe from damage if you're sitting on Merlin. And that's part of the problem. Influence-eating, hand-clogging, tends toward slower play, as if you get lucky you've got a 2X Lancelot or Merlin combo early. And when most runners have their rig up, the Grail suite is not that bad at all. Larger hand sizes or scoring The Future Is Now can help I guess. Daily Business Show, too. The other thing I don't really like about them is that when the first piece is rezzed, the game is up. Sure, maybe you'll pull in a Lancelot or two as a punishing lower-costed sentry, a cheaper Grim. But a Merlin? I see that, I know what you've spent your influence on, and how not to attack you. — GrantZilla1979 28 Dec 2015
2

Merlin is the heavy hitter of a Grail Ice Suite. It is expensive to rez at 6 and because many players face-check using a sentry breaker they may not be prepared to get damaged by a code gate.

Merlin can support or be supported by Lancelot for program desctruction and/or Galahad for End the run. The best support for Merlin is another Merlin, or even better, two Merlins, you might even be able to get a flatline. The most likely way you can get another Merlin in your hand is to use this in The Foundry: Refining the Process decks. Another way is to tutor for it with cards such as The Future is Now, Project Atlas or Levy University. Now levy will give the game away, but it does force them to get all three breakers (or a good AI breaker) out before running unrezzed Ice again (alternatively they could just run with 4/6 cards in hand).

Another less likely possiblity is Excalibur which may or may not be relevant depending on which server you have located your Ice on. Often central servers get run 1st in multi-run turns, either to deactivate Jinteki: Replicating Perfection, build up Datasucker tokens, during a multiple-run Medium dig or sometimes during a Account Siphon/Vamp and then run unrezzed Ice play. Defending a scoring server with Ash 2X3ZB9CY, Caprice Nisei, Red Herrings, a Nisei MK II agenda token or even Marcus Batty becomes much more effective when it is their owly run that turn.

Ultimately I do not recommend using Grail Ice except for #Excalibur, which is a superb piece of Ice for many types of decks. I tried using it and it's simply too easy to break and not much of a threat once surprise is lost. Since there is no point 'splashing' Grail you will need to commit half your hand and half your influence to it - yes it can be fun to play with, but not in any deck you want to regularly win games with.

Snare!, Shock!, Shi.Kyū or even Fetal AI in your hand to finish the job. House of Knives, Hokusai Grid or a next-turn Neural EMP/Ronin/Philotic Entanglement score can be the finishing move.

(Business First era)
Zakalwe 471
A decktype not mentioned is The Twins Weyland http://netrunnerdb.com/en/decklist/29862/grailand-or-the-twins-effect — Jutranjo 17 Mar 2016
I had a look at this deck and I'm a bit confused by it, I think Corporate Troubleshooter is a great support card to make sure the Grail Ice actually hits, but doesn't discarding Grail Ice with Twins lower the effectiveness of all of your Grail Ice in general? When you twins a piece of Ice it gets trashed, so it can't even target itself for an extra subrountine anymore. The only case I can see is the 6 Net Damager net kill if you have Merlin over The Twins and another Merlin in your hand and you have 8 credits to rez both and the runner cannot break code gates and does not have net damage protection. Then you rez Merlin, show Merlin, rez The Twins and trash Merlin for 6 Net damage. It would be fun to do, but it is a really low percentage play. — Zakalwe 17 Mar 2016
Keep in mind that when the runner re-encounters the ice due to Twins, it still has the extra subroutines gained from the first time around, and keeps its Troubleshooter boost too. — Toper 18 Mar 2016